The study of ancient mummies provides a new insight into the history of tattoo art. Namely, for what purposes tattoos were applied by our ancestors.

One of the most famous tattooed mummies is Ötzi, who lived in Europe between 3500 and 3400 BC. He is also known as the Iceman due to the fact that his body was naturally mummified after death in the glaciers of the Alps in the Ötztal valley.

On his body, scientists found 61 tattoos of lines and crosses, made by rubbing charcoal soot into cuts in the skin. However, an interesting fact is not the discovery of these tattoos, but their location on the body. All of them are located in places that most of the time of the year remain covered with clothes, which means they were not used for decoration. 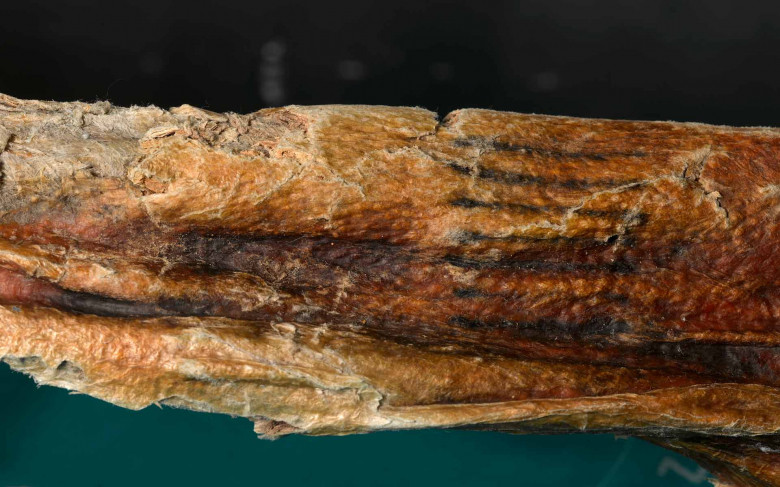 All of them are located in areas of the body that are subject to increased traumatism: near the chest and lumbar spine, on the wrists, knees, calves and ankles, which probably caused Ötzi pain during his life. Therefore, it's believed that these tattoos were made for therapeutic purposes to reduce pain. This theory is supported by the location of tattoos on acupuncture lines, which are still used by practitioners today.

The other two Egyptian tattooed mummies, named Gebelein mummies after the region of discovery, and dated between 3350 and 3020 BC, indicate that their tattoos are more decorative or symbolic.

The man (Gebelein Man A) has two tattoos - a wild bull and a Barbary sheep on his shoulder, while the woman (Gebelein Woman) has linear and S-shaped motifs on her shoulder.

They predate the Egyptian pharaonic dynasties, and their bodies were mummified in a completely natural way by being buried in shallow graves in the dry, hot, and saline conditions of the Egyptian desert.

In fact, the mummies were excavated in the 1890s and have been in the possession of the British Museum since the 1900s, however, the tattoos on their bodies were discovered not so long ago. The fact is that the mummified skin loses its color, and the tattoos on it become much lighter. In the case of Gebelein Man A, the tattoos on his body in natural light looked like a dark spot and remained unexplored for more than a century, and only the use of infrared photography allowed scientists to notice and study them. 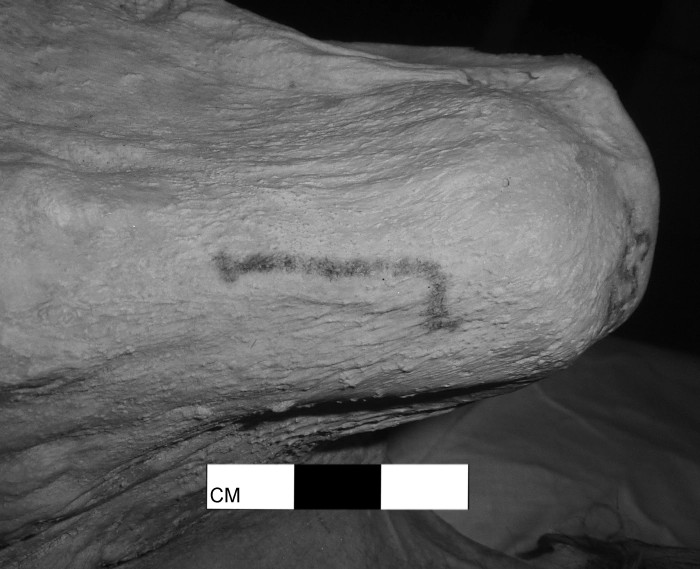 Formerly, only women were depicted as tattooed in modern and earlier pre-dynastic Egyptian art, but Gebelein Man A demonstrates that both men and women wore tattoos.

Their tattoos were already applied with carbon-based ink, and the drawings were located on the exposed parts of the body, which indicates the decorative component of these images. 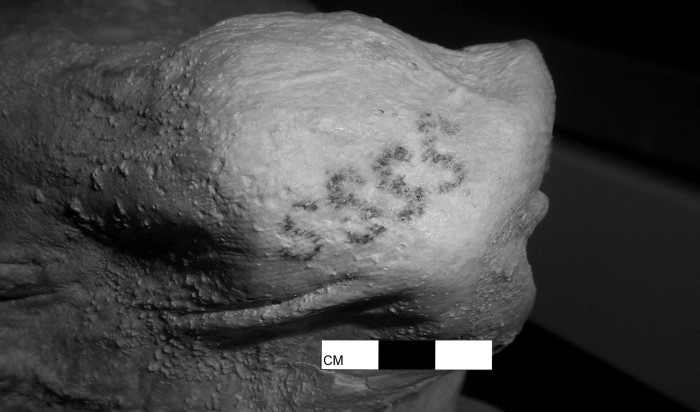 In total, 7 mummies were found in Gebelein, however, only two of them had tattoos. This, and the places of the drawings on the exposed parts of the body, prompted scientists to think about the special status of the carriers of these tattoos.

The bull and the Barbary sheep on the man are motifs found in rock art, while the curved line on the woman is reminiscent of the staves held by figures on painted pottery. The S motif is also found in pre-dynastic Egyptian pottery.

Back in the early 1920s, archaeologists discovered an ancient city called Deir el-Medina near the Nile River in Egypt. Previous research has shown that the city was active between 1550 and 1070 BC and served as a community for men (and their families) who built tombs for Egyptian royalty. However, when the mummies were re-examined using infrared scanning, tattoos were also found on them.

According to University of Missouri anthropologist Ann Austin, this suggests that the practice of tattooing may have been more common in ancient Egypt than we know. 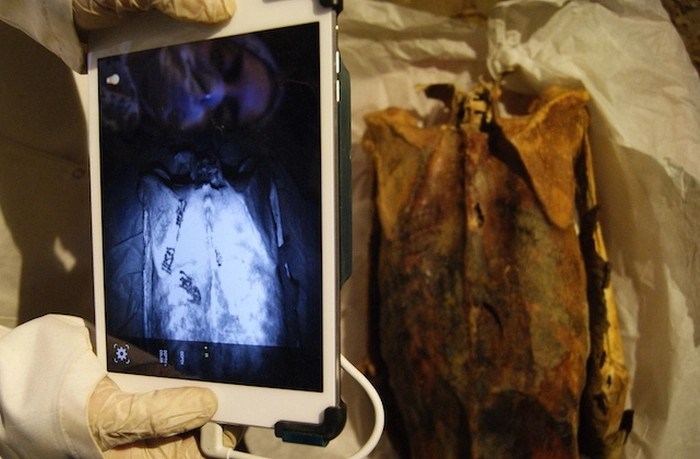 Anne Austin's study of tattoos on ancient Egyptian mummies continued for several years. It all started in 2014, when Austin and her colleague Cédric Gobeil noticed marks on the neck of the female mummy of Deir el-Medina. Upon closer inspection, it turned out that the marks were not drawn, as she first thought, they were tattoos.

On the next mummy from Deir el-Medina, scientists found a strip of repeating diamonds, similar to the patterns that could be seen on the ceilings of the tombs of that time. The tattoo was located on the lower back. 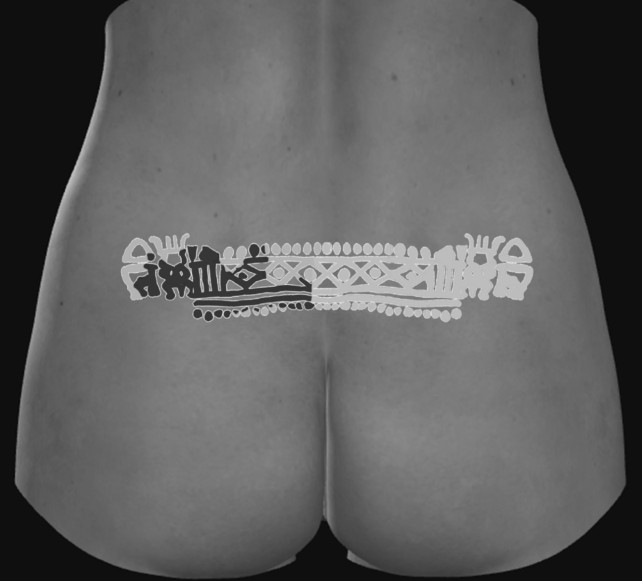 Reconstruction of the tattoos on one of the Egyptian mummies from Deir el-Medina, with the lines still visible on the skin shown in black. (A. Austin)

Another female mummy was discovered in 2019, but her lower back tattoo could only be seen using infrared photography. The symmetrical pattern on her lower back is also slightly different, depicting a water pattern and a line of plants. 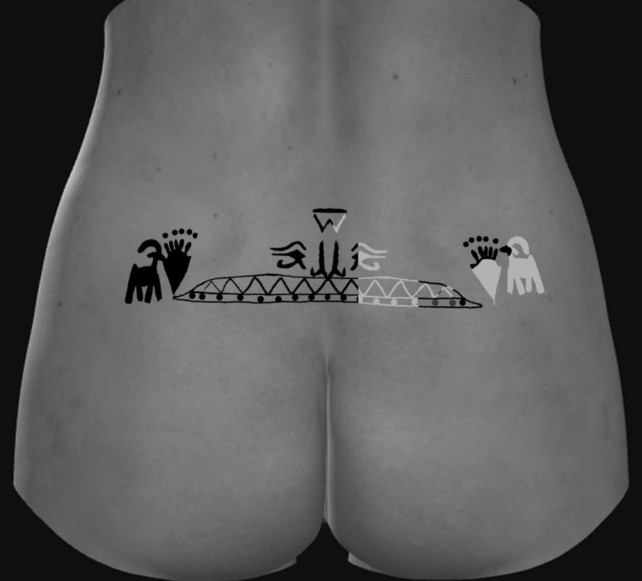 Reconstruction of the ancient tattoos found on one of the mummies from Deir el-Medina using infrared photography. (A. Austin)

Scientists suggest that this may be an image of the banks of the Nile, where women could come to calm down during pregnancy or menstruation. Watching the scene is Wadjet, or the eye of the god Horus, which symbolized healing, well-being and protection.

One of the mummies, found back in the 20th century, was found to have a tattoo on her hip, similar to the image of the Egyptian god Bes, who, among other things, was a protector of pregnant women. 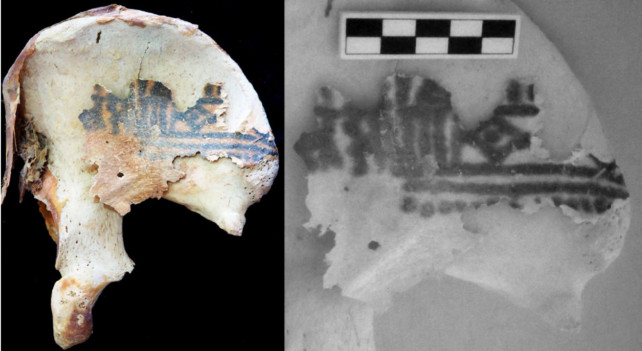 The hip tattoo found on an Egyptian mummy in Deir el-Medina. The right image was taken using infrared photography. (A. Austin)

The location of the tattoos on the hips and lower back, led scientists to suggest that perhaps such images belong to the rituals associated with reproduction. However, there is no confirmation of this, since such tattoos are not found everywhere.

«If the tattoos were intended to ensure successful pregnancy and childbirth, or avoid pain for the woman who bears them, we would expect to find the presence of these markings far more frequently,» - said researchers.

The mysteries of antiquity still remain mysteries, however, each new study brings us closer to understanding the motives of our ancestors and the participation of tattoo art in their lives.