Today, the hero of our article is a young but damn interesting tattoo artist from Moscow, rather even two artists in one Dima Roudi / Semplai.

Dima began his career at the age of 17 from the hand poke tattoo, making exclusively manually tattoos, improving in it and popularizing this trend in Russia.

«To get a tattoo, I had to quit the university and the presidential scholarship, which literally brought my mother to a heart attack. The fault is not mine, just she was so against tattoos.»

A little later, he joined Oleg Navalny’s project «Russian prison tattoo», released a series of instructional videos about the hand poke. In addition to video content, Dima held master classes and even released his own author's staff for the hand poke tattoo. At that time, as the artist himself said, he hated the rest of the tattoo party.

In parallel with the development of the hand poke direction, Dima successfully engaged in design, creating sketches with inscriptions that instantly quickly dispersed over the Internet, merchandise goods and the bodies of people.

His work flashed in many public places, in the form of tattoos of popular bloggers, and the merch with his design shone on a guests of Yury Dud' (It's a one of the most popular video blogger in Russia). 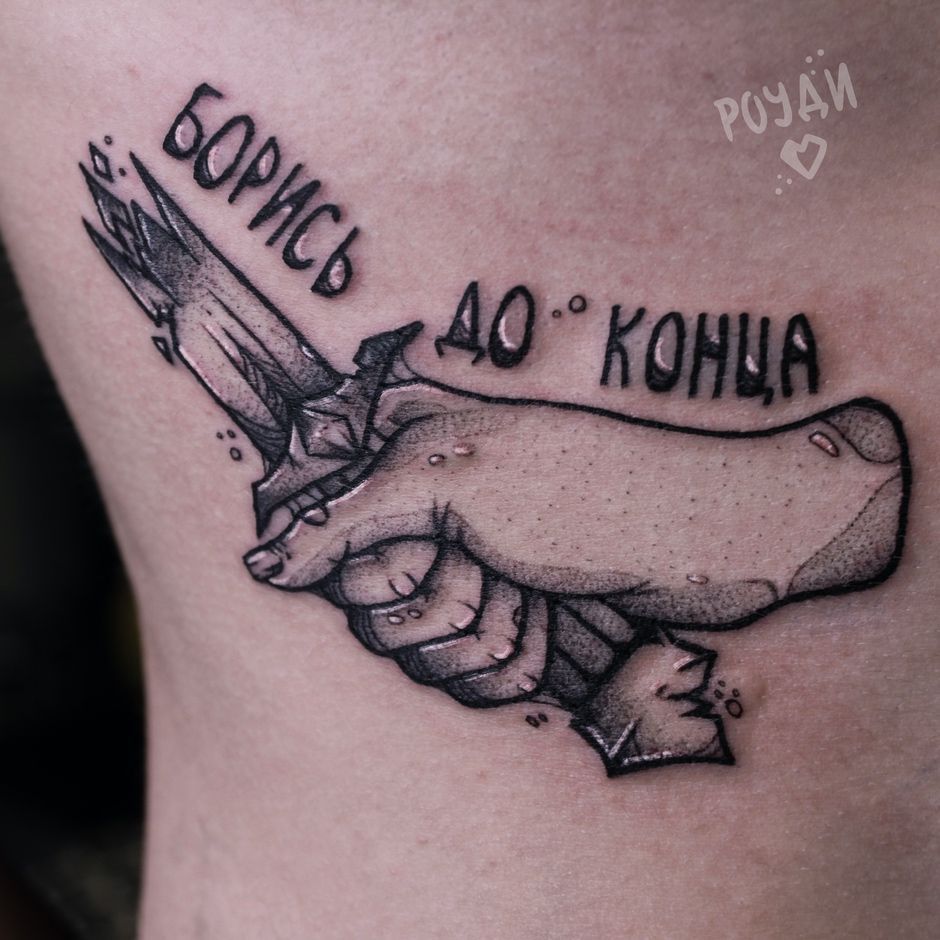 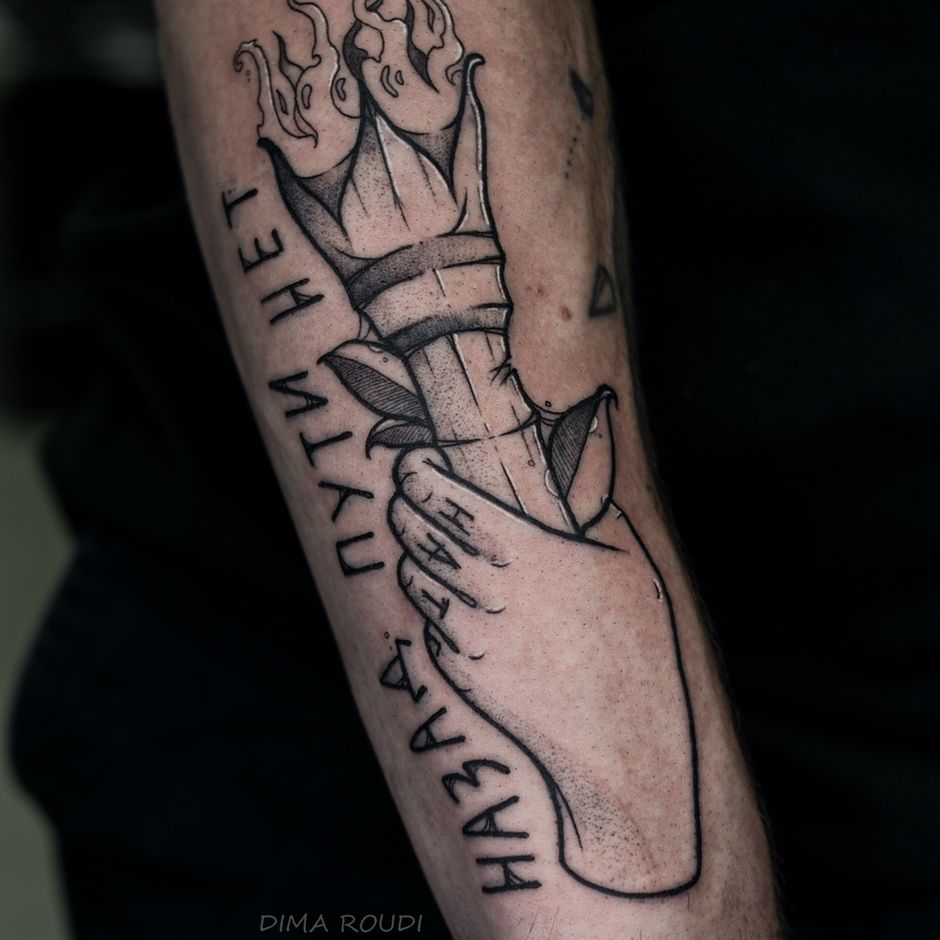 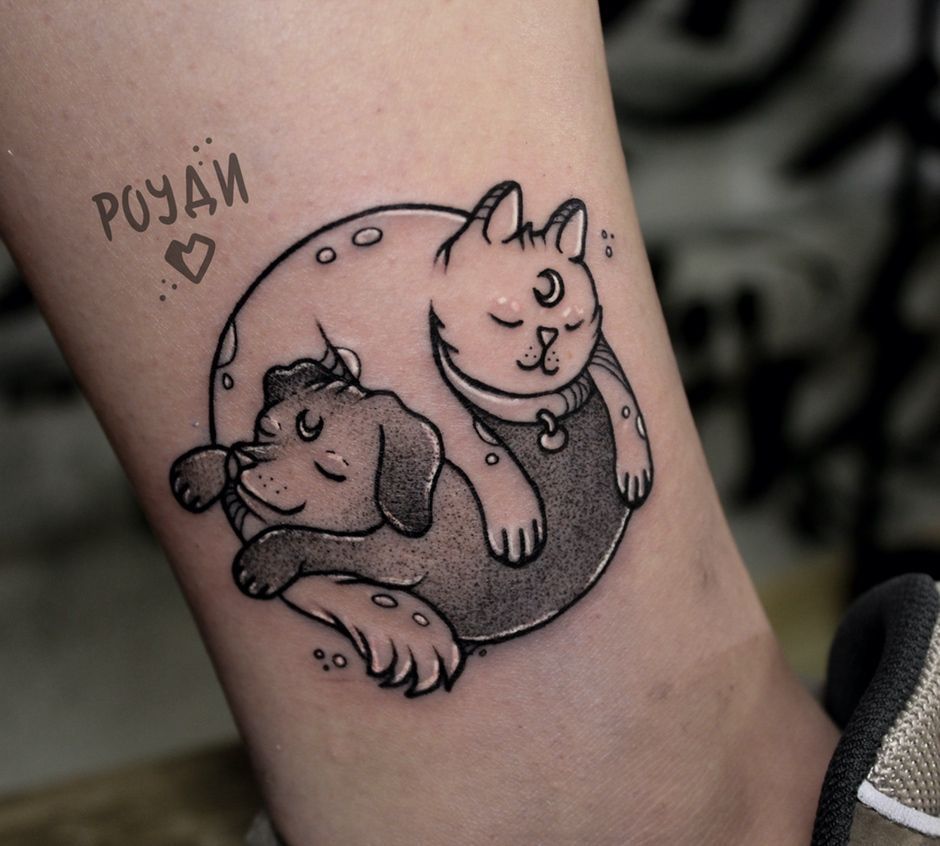 In March 2018, Dima realizes that the hand poke is too narrow direction limiting his creative development, and Roudi leaves it. He opens a studio in his native Nizhny Novgorod, which existed until the artist moved to Moscow.

Since that time, he came to the conclusion that his works are vivid elements of oriental culture with bold lines framing sketches in the author's style of the tattoo artist. 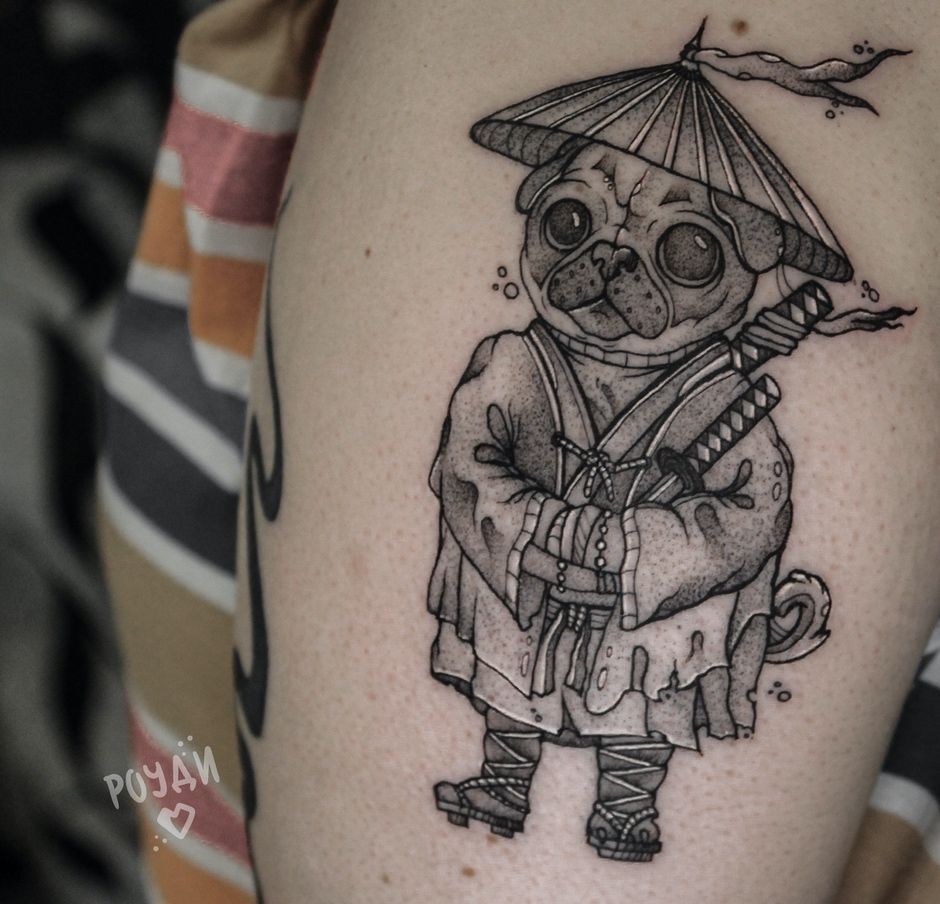 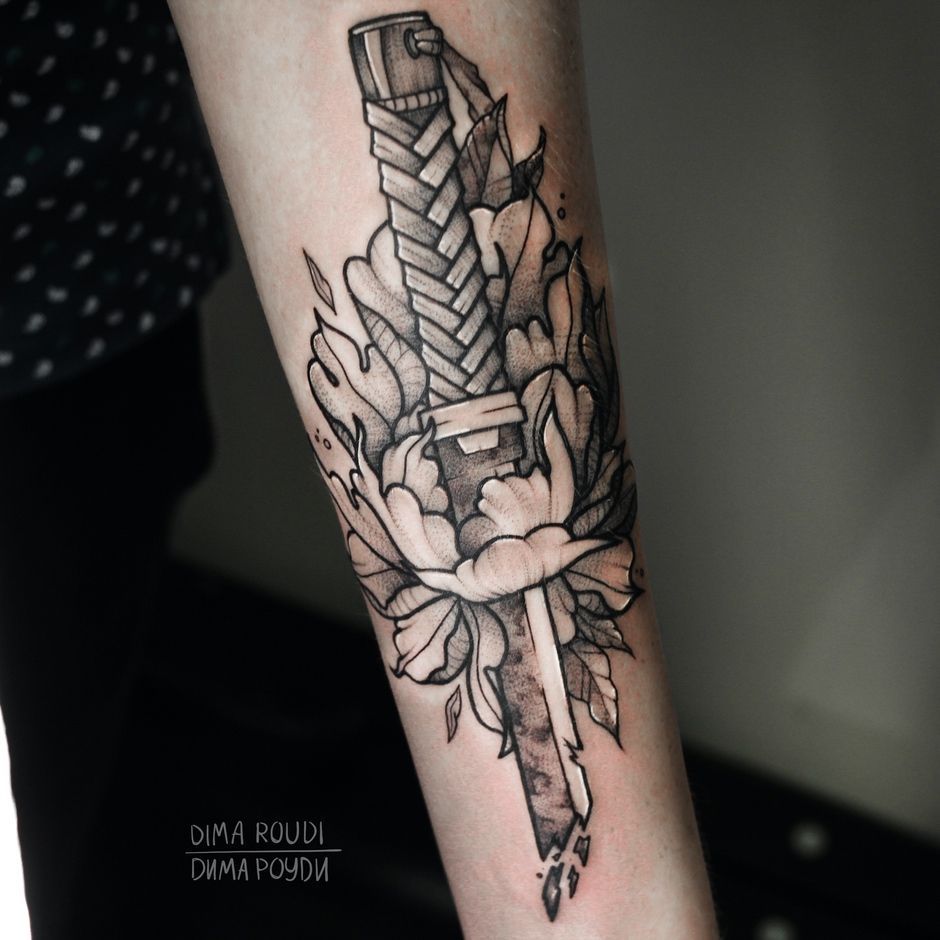 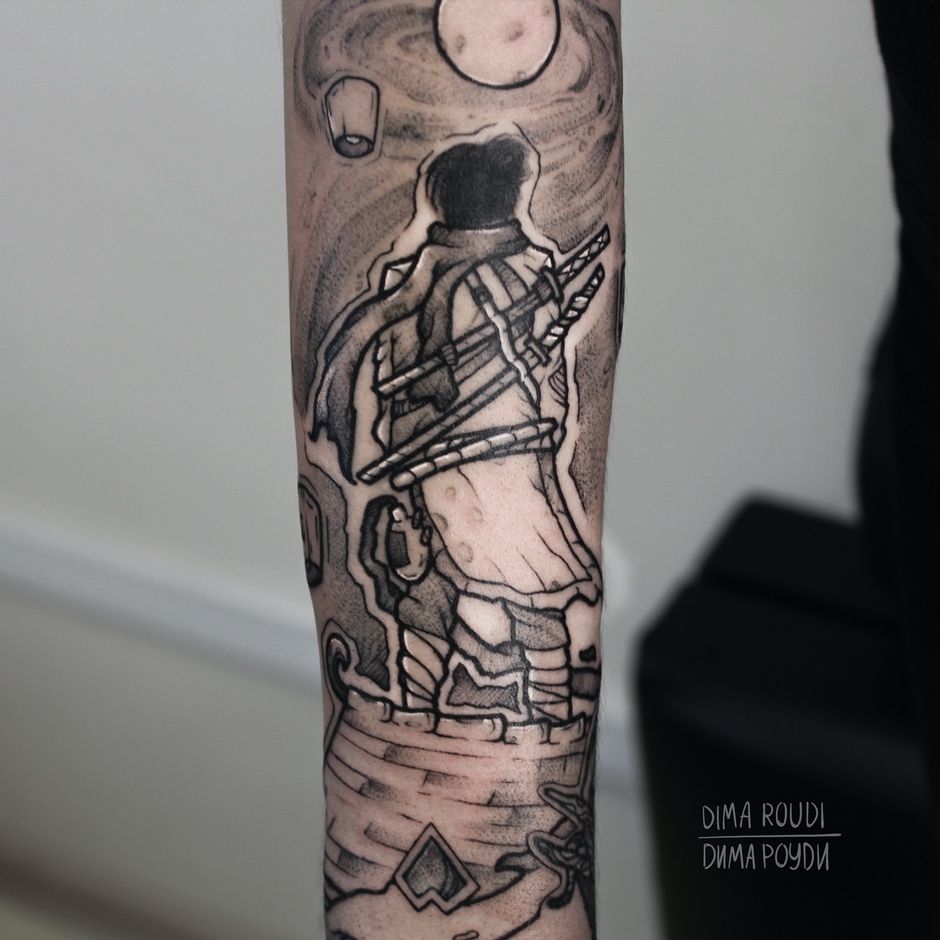 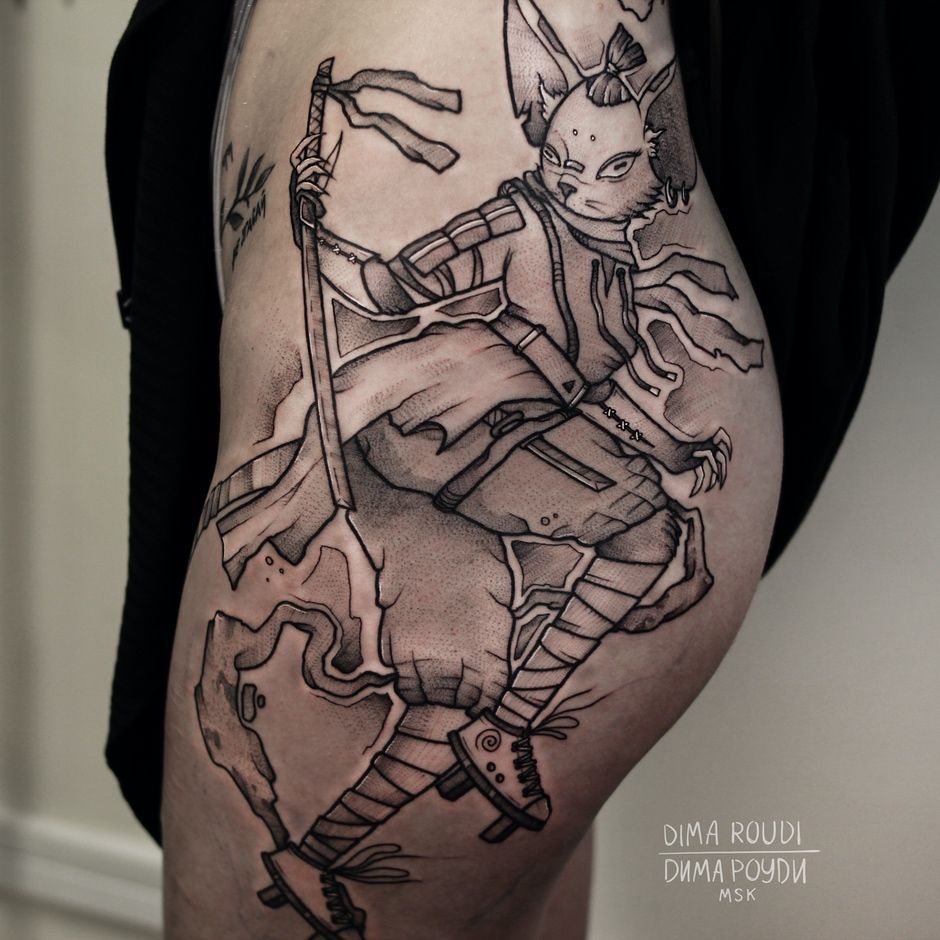 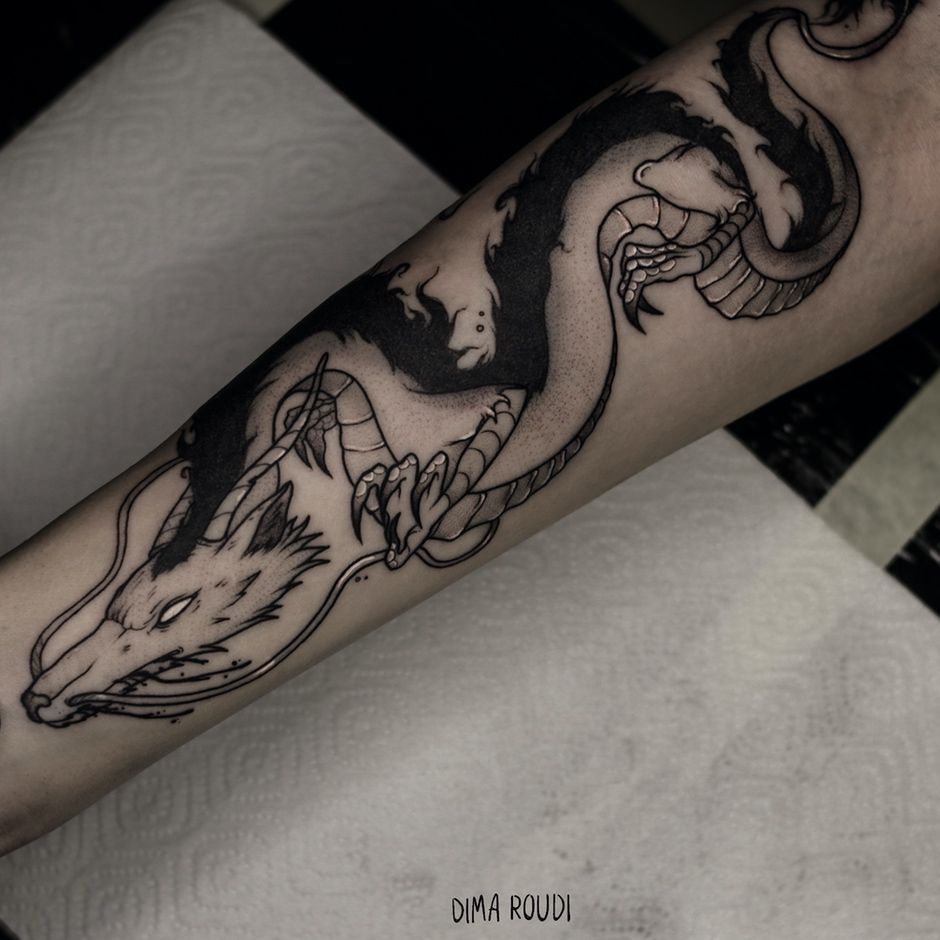 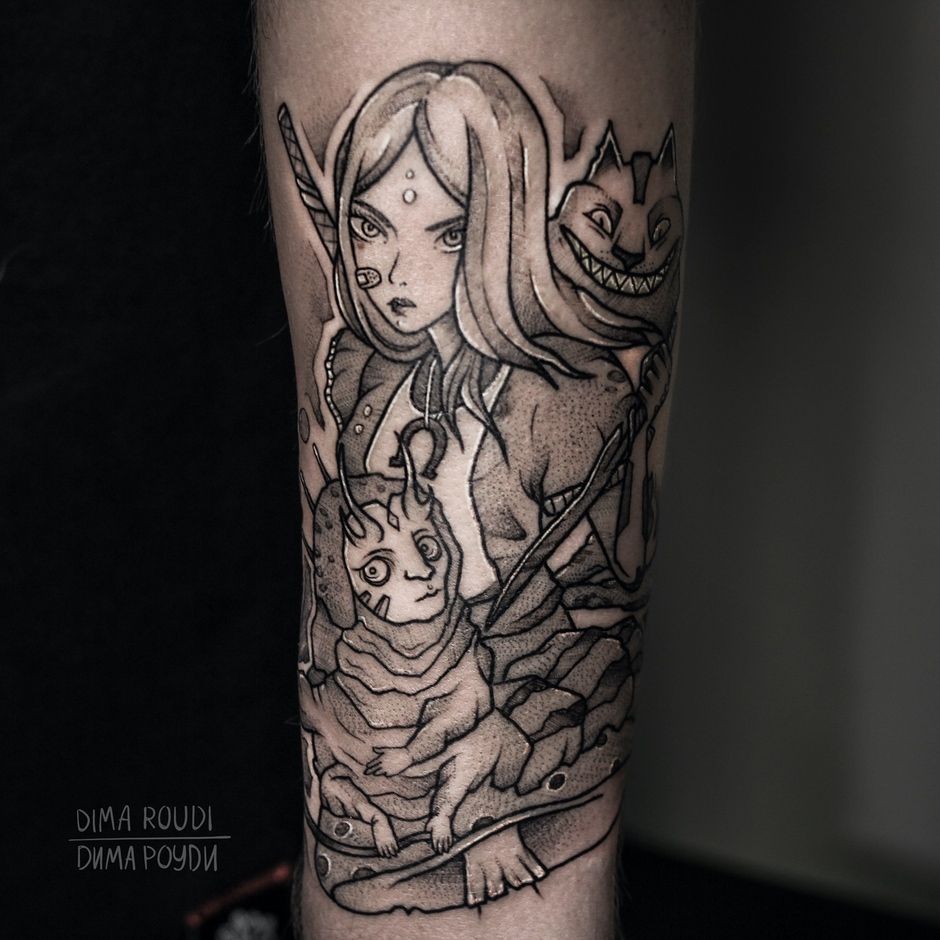 But soon, working in one style was not enough for him, so in parallel with the main activity, Roudi is called himself - Semplai and begins the second project, where he makes only detailed tattoos based on anime and manga. The idea itself, coupled with excellent execution, gives a very successful start to the project and instantly finds its audience, diverges in thematic communities and attracts both Russian and foreign tattoo communities.

«For me, tattooing is creativity and game. All complaints from other tattooists, which I hear mainly about the fact that there are no clients, that they do not go to cool sketches and are asked to do some trivial things.

I just like to do my job, I do not adapt to customers, but I behave openly. And it attracts the right people.

I was lucky to have such a cool audience and I try to give all my best to everyone. It’s a pity, of course, that this does not always work out, especially when you worked 8 days in a row before. But if I get tired of the sessions, then only physically.

If you don’t get high on what you’re doing, you’re not ready to get up at 5 in the morning and don’t want to be the best in the world, why the hell do you do it?» 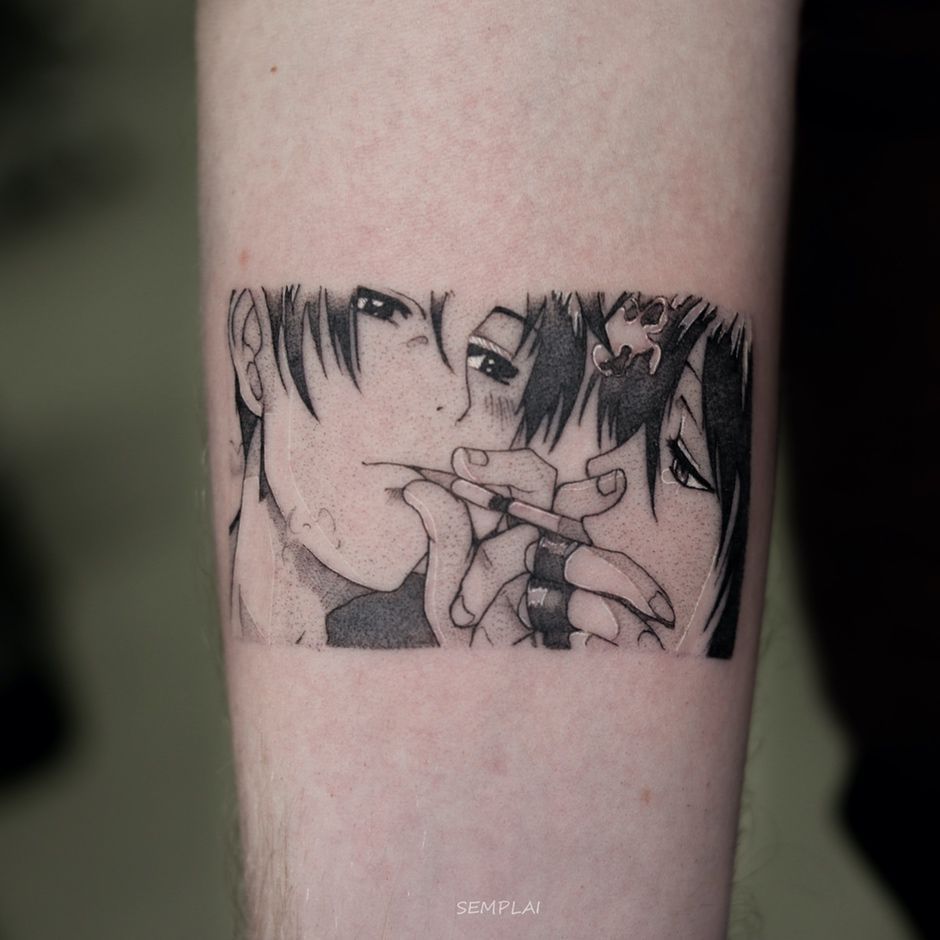 Two completely different stylistic directions of the tattoo not only coexist in one artist, but also do not limit his development in each of them. You can verify this yourself by visiting the Instagram profiles of the artist: @dimaroudi и @semplai. 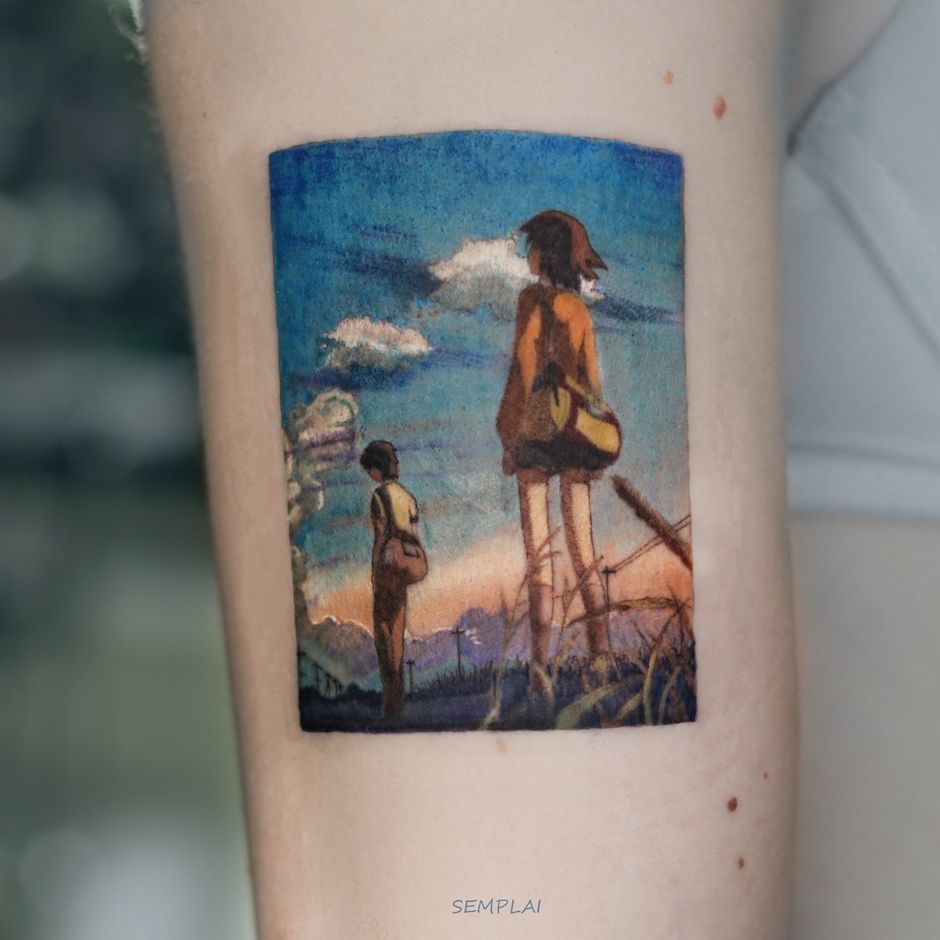 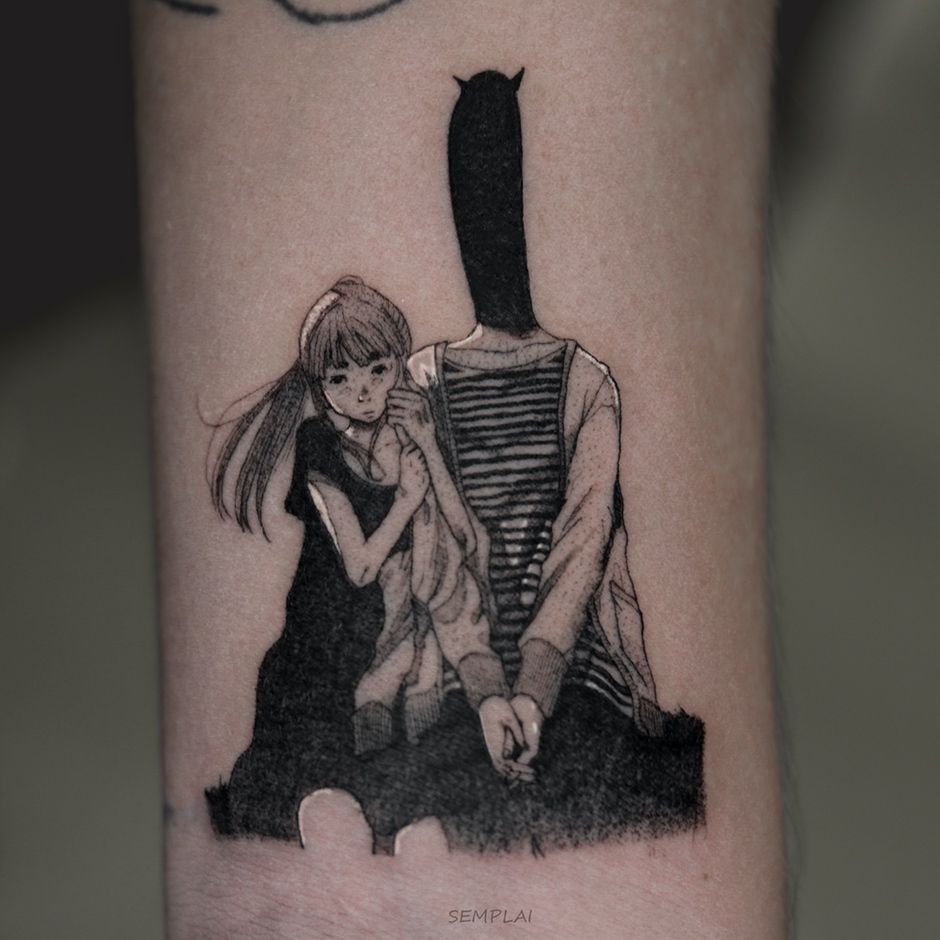 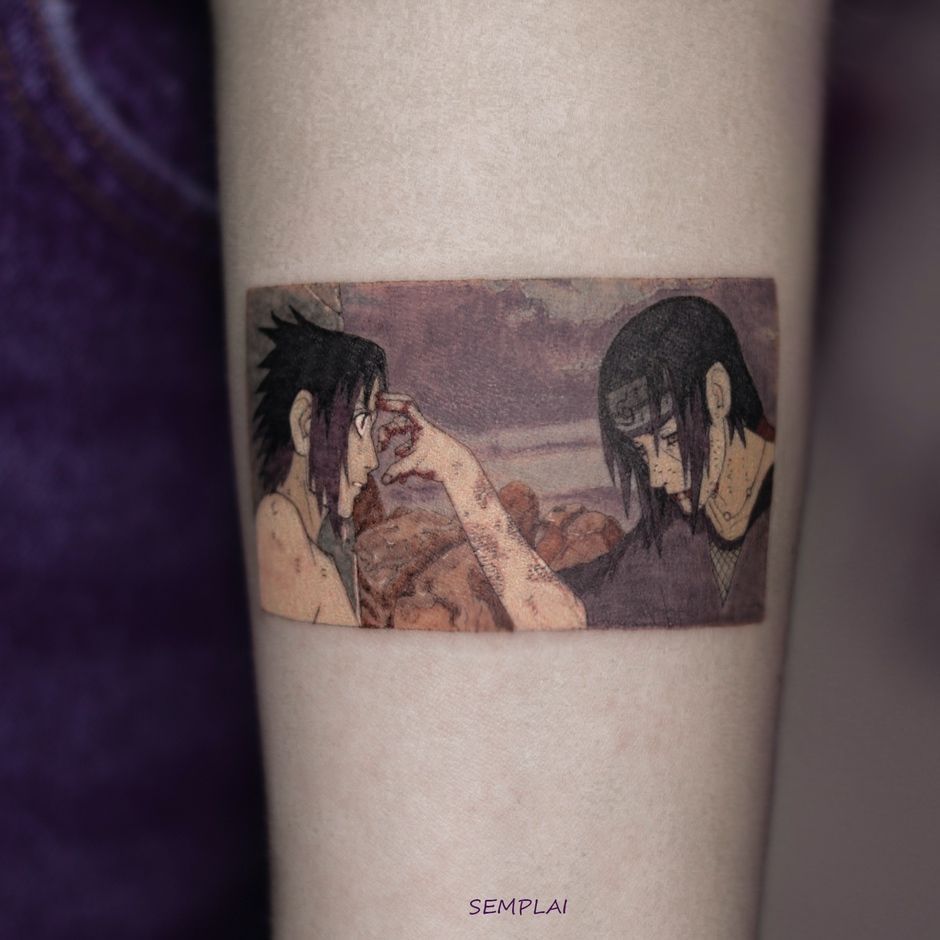 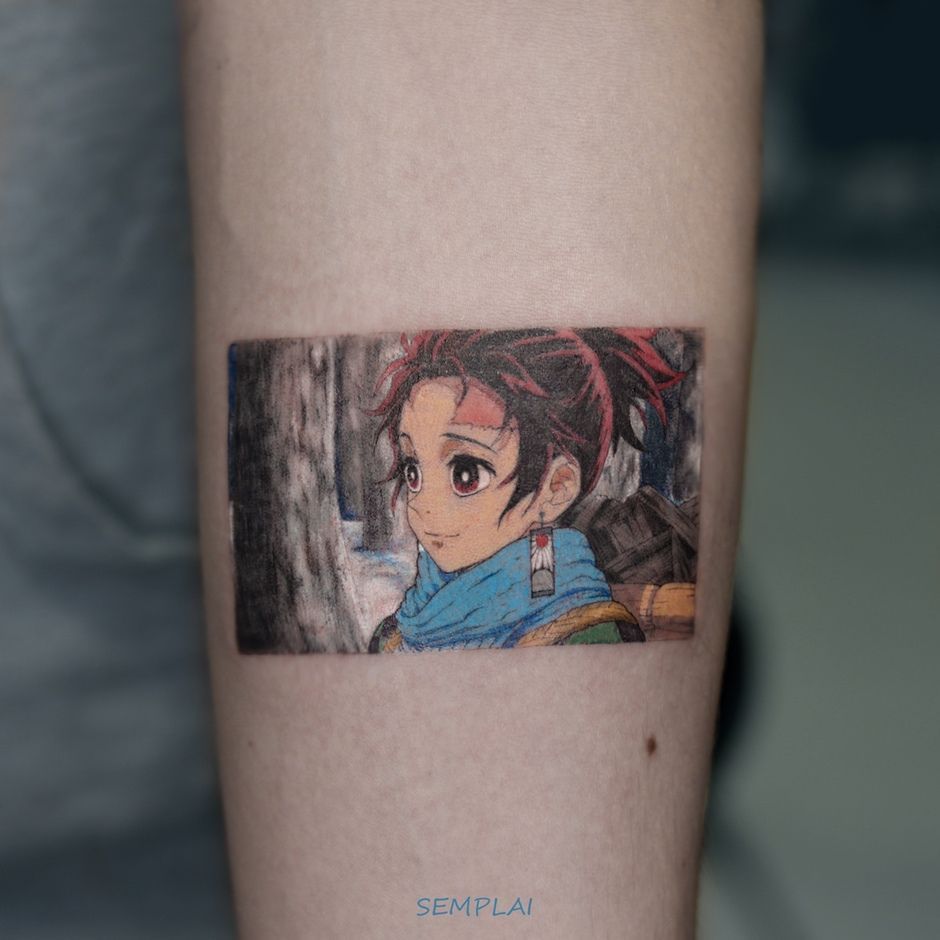