What is the Dermalize Protective Tattoo Film?

Tattooing is nowadays a very challenging art performed by dedicated and well prepared artists, frequently looked for by demanding tattoo collectors, so its expectations grow day by day. Performance goes hand in hand with technological progress also in the tattoo industry and aftercare is becoming a central player in the end results. Amongst the current most innovative tattoo aftercare products we find also the Protective Tattoo Film Dermalize, devised and produced by the tattoo artist Alex De Pase.

DERMALIZE PROTECTIVE TATTOO FILM is the only certified all-in-one tattoo aftercare solution for the initial healing stage of a tattoo. A thin self-adhesive film that provides a moist healing environment during the initial, and most critical, healing stage of a tattoo wound. It protects the new tattoo from friction and provides a WATERPROOF, ANTIBACTERIAL BARRIER that prevents pathogens and external contaminants from entering the tattoo wound, as long as it is still open, so when most subjected to risks of infection. The film is BREATHABLE, letting oxygen in and allowing excess moisture vapor to be released from the wound. It’s light to wear, FLEXIBLE and stretchable, which allows it to be placed anywhere on the body, also on large scale tattoos. It enhances cicatrization and guarantees a persistent brilliance of the tattoo colors. 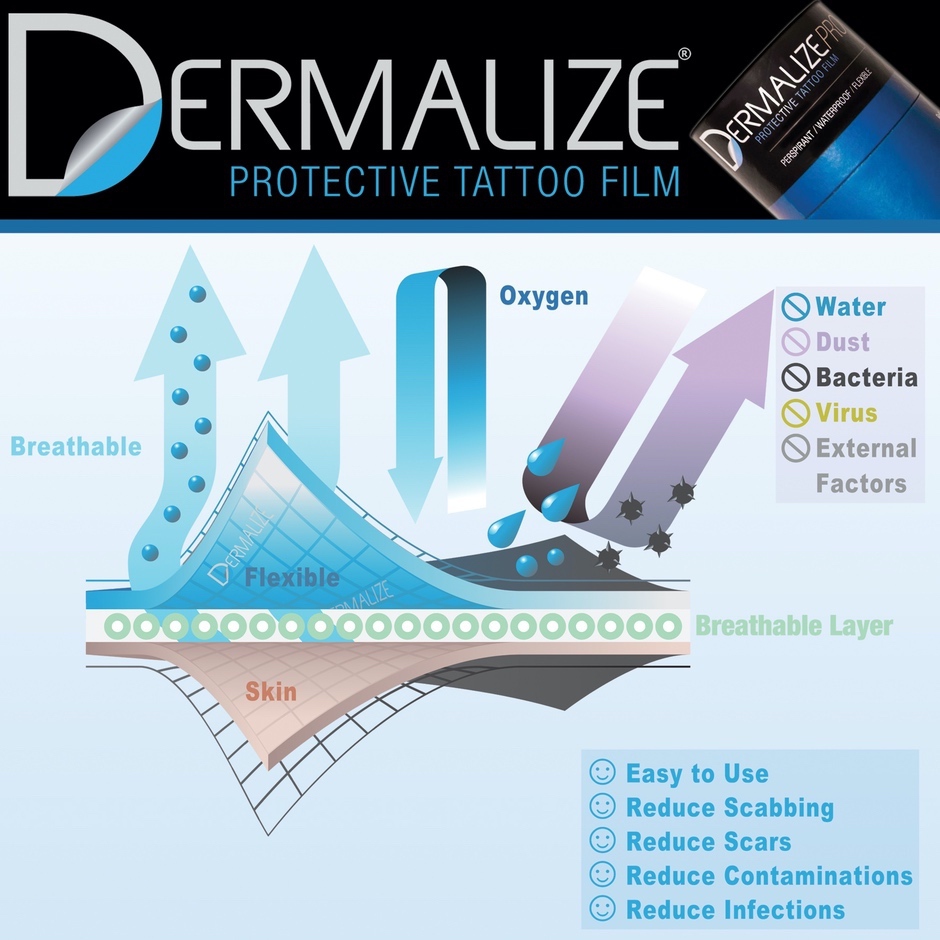 Dermalize Protective Tattoo Film is made of polyurethane and hypoallergenic acrylic glue and it is registered as a medical device of class I with the Italian Ministry of Health, as well as with the American FDA (Food & Drugs Administration). It is dermatologically tested and before its release on the global market in February 2015, it had been tested for about 2 years by a pool of 10 among the most qualified and renown tattoo artists in the world.

The trademark Dermalize (D-lizepro in the USA) sets itself on the global tattoo market as a certified medical replacement of the commonly used alimentary cling film that has always been used in the tattoo aftercare, very often in an improper manner.

It represents a fundamental step and sets a milestone in the history of modern tattooing: from a film that was initially used in the food and beverage industry, we have turned to a product, approved by the Italian Health Authorities, that has been specifically devised and designed for the healing of wounds generated by the practice of tattooing. It does not substitute or conflict with any existing products on the market, such as tattoo aftercare balms, creams or similar; on the contrary it goes hand in hand with any of such products, supporting and endorsing their use. It guarantees more safety, more hygiene, more protection, which qualify as unique and victorious characteristics on the global market. 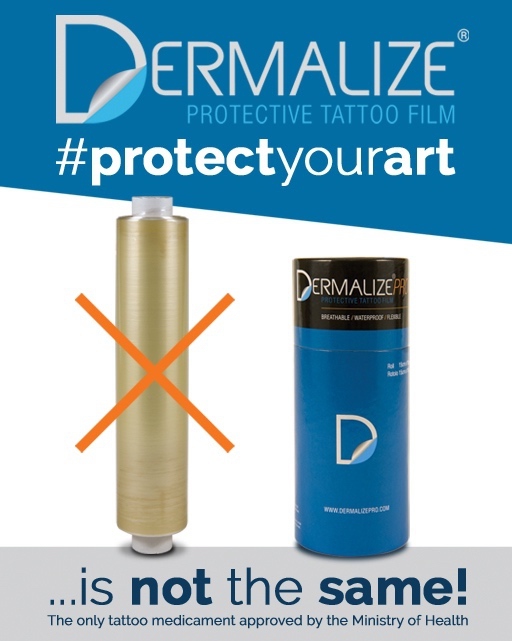 The adhesive polyurethane film adheres perfectly to dry skin WITHOUT GETTING STUCK WITH THE TATTOO. It lets the tattoo wound breathe from inside out and it builds an ANTIBACTERIAL BARRIER that guarantees a thorough protection from external agents. The tattoo film must be changed regularly as prescribed on the website www.dermalizepro.com, but once the clients apply Dermalize correctly, they are exempted from any other action to preserve and look after the healing of their tattoo. No more ink dripping and smearing your bed linen or clothes, no more continuous and repeated washing of your tattoo every 3 hours, no more missed sport trainings or social events because of the new tattoo, no more “suffocating” your tattooed skin with useless and harmful cling-film. On the contrary: reduced scabbing, reduced risk of infection, care for protection and hygiene, freedom of movements and actions, no rubbing clothes or any external factor that will damage your tattoo. Just beautifully healed tattoos like you intended to! 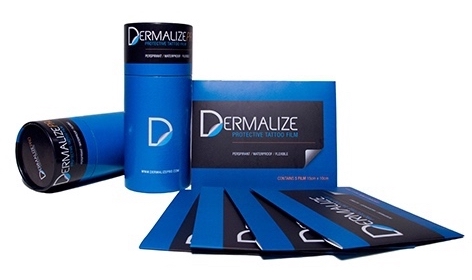 Dermalize is available in two formats, depending on the end-user: for professional tattoo artists the best is the DERMALIZE PRO format (roll which includes 15cm x 10mt of product), ideal for the first application after completing the tattoo. To tattoo collectors we offer Dermalize individual packages of 5 pre-cut sheets (15cm x 10cm) to continue the aftercare at home.

Dermalize Protective Tattoo Film is also very easy to use. On the website www.dermalizepro.com users may access a full page with directions and tutorials dedicated to its application, but all in all, Dermalize Protective Tattoo Film is composed of 3 layers: both the external ones must be peeled off, leaving just the middle adhesive polyurethane film sticking on the tattooed skin. For large scale tattoos, over laying the pre- cut film pads with maximum 1-2 cm bleed is advisable. 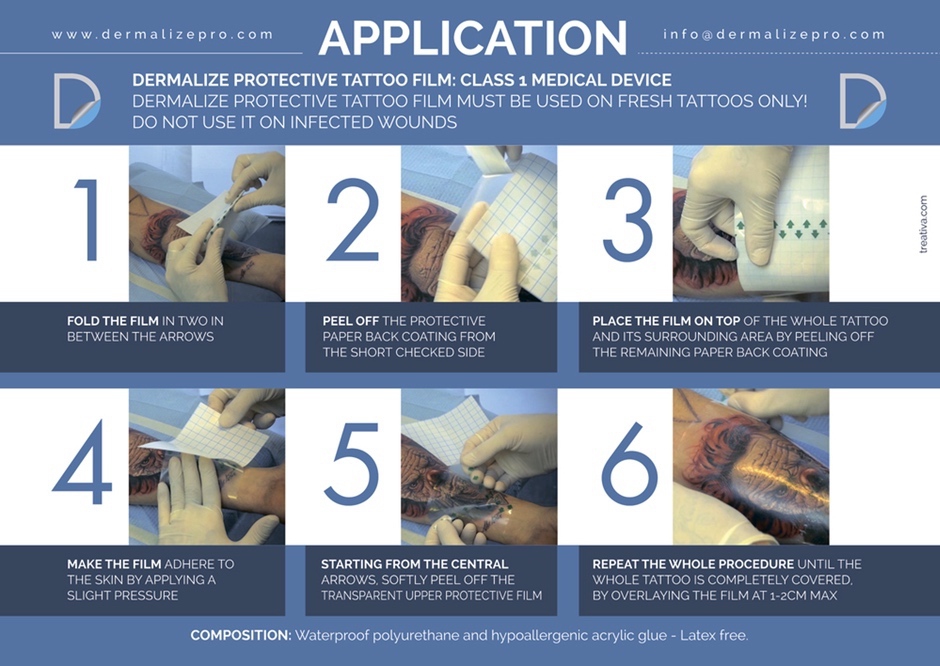 Once applied, the first piece of Dermalize Protective Tattoo Film may be left on the skin up to max 24 hours, the exact time will depend on the amount of fluids that the wound exudes: this will vary from person to person and from the genre of tattoo. In case of copious bleeding or weeping, the film can be replaced with another piece after 4, 6 or 8 hours. In most cases people choose to wear the first piece of tattoo film for the first 24 hours, but it is advisable to change it whenever it gets dirty, too loose or full of liquids. When removing the film, preferably under warm running water, make sure to carefully wash the area with proper antibacterial soap and water, and gently dry the tattoo. Apply a very thin layer of ointment on the tattooed area to ensure a moist healing under the Dermalize bandage. This will also make it easier to remove it later on. Any further application of Dermalize can be kept on for a variable amount of time, depending on the client’s need, changing it when necessary, possibly at least once a day. The total suggested use of Dermalize, covering all applications, is between 6 and 7 days.

It is highly recommended to remove Dermalize under the shower and if it is hard to pull off the skin, simply let some warm water run under the tattoo film, so that the glue becomes more tender and the removal of the film is easier. Dermalize Protective Tattoo Film must be used on fresh tattoos only and it must not be applied on infected skin. On some rare cases some users may be sensitive or allergic to the acrylic glue contained in the film. This will generally produce reddened skin, pimples or skin rushes that will soon disappear, once the use of the product is discontinued. 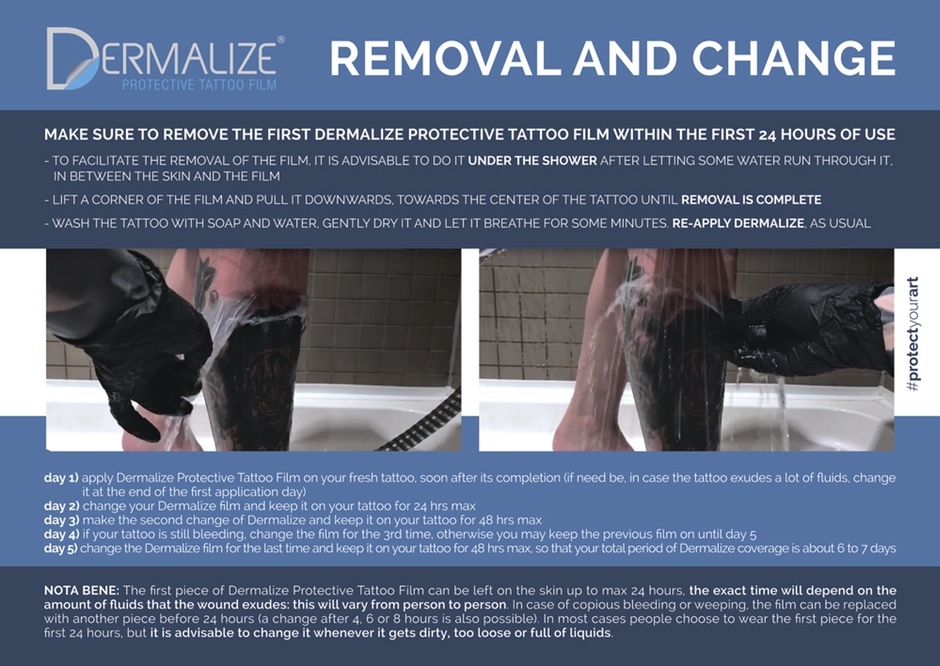 Dermalize Protective Tattoo Film was presented to the public in February 2015 during the Milan Tattoo Convention. Nowadays, after four years, it is being distributed in 47 countries, from Europe to USA and Australia, through a network of wholesale and retail dealers, both on exclusivity terms or with multiple distributors within the same country’s territory. The market in South America is also currently being opened.

Dermalize Pro is also chosen by the best tattoo artists in the world. As a matter of fact it has been endorsed by several testimonials and it is being continuously supported by a group of world top ranking tattooists, who have tested the product and have acknowledged it as a valid, revolutionary and indispensable tool for their tattoo aftercare. 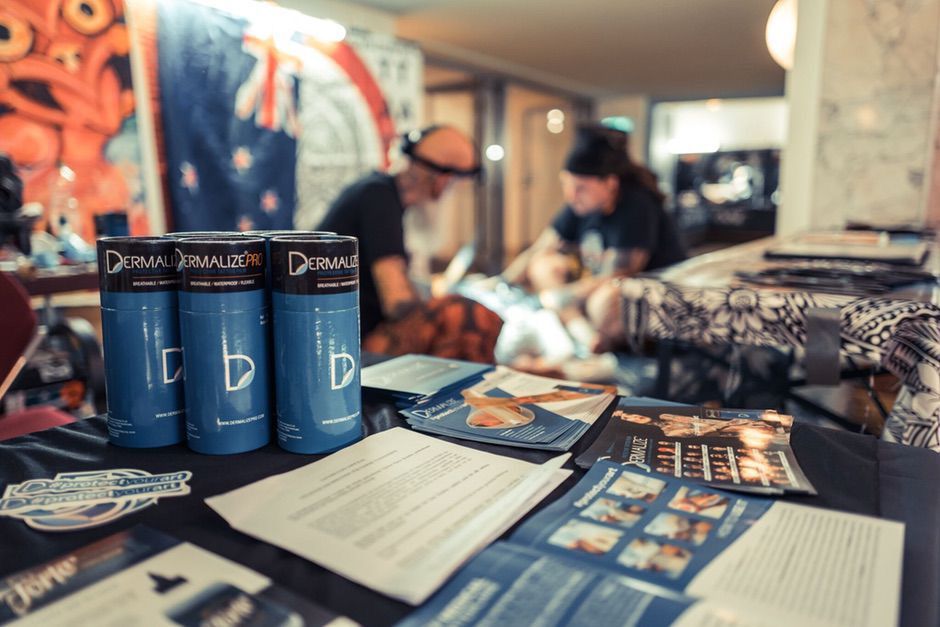 Some of their testimonials may be viewed on the homepage of: www.dermalizepro.com. For any doubts, please consult the above mentioned website in the dedicated FAQ’s page. The time of cling-film is over. Dermalize is taking over!

AS WE REALLY CARE FOR YOUR TATTOOS AND WE WANT TO #PROTECTYOURART, DERMALIZE IS ABOUT TO LAUNCH SOME NEW INNOVATIVE AFTERCARE PRODUCTS ON THE MARKET! STAY TUNED! 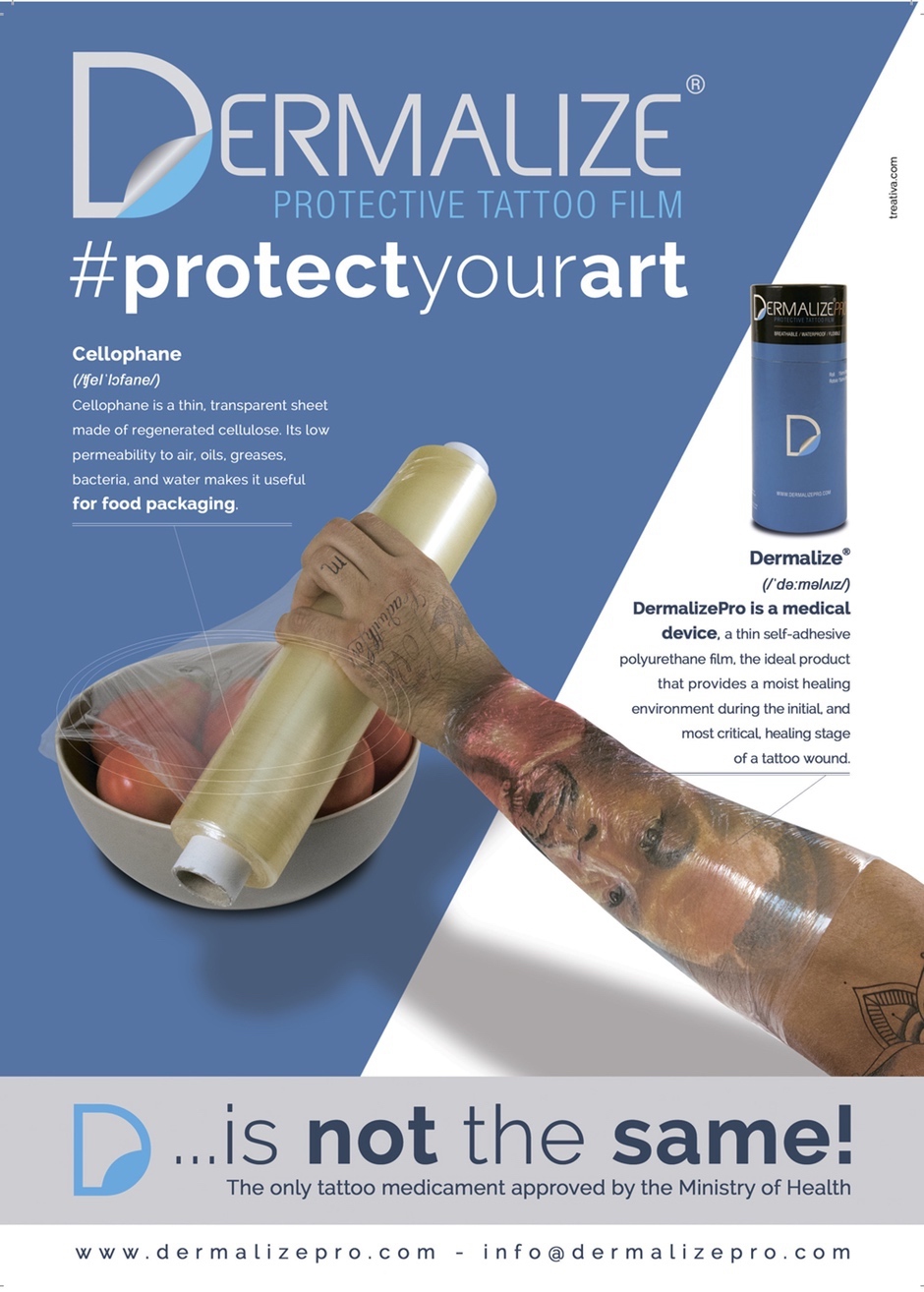