The magic of geometry in realistic tattoos by Evan Summers

Evan Summers is a talented tattoo artist from Moscow with a unique style that harmoniously intertwines geometry, linework, realism and amazing attention to detail. Tattoos from Evan combine the complex realistic forms of ancient Greek sculptures and many geometric objects: lines, dots and other simple shapes. This combination creates a full-fledged meaningful picture, causing a desire to study it, unravel its secret meaning or riddle. 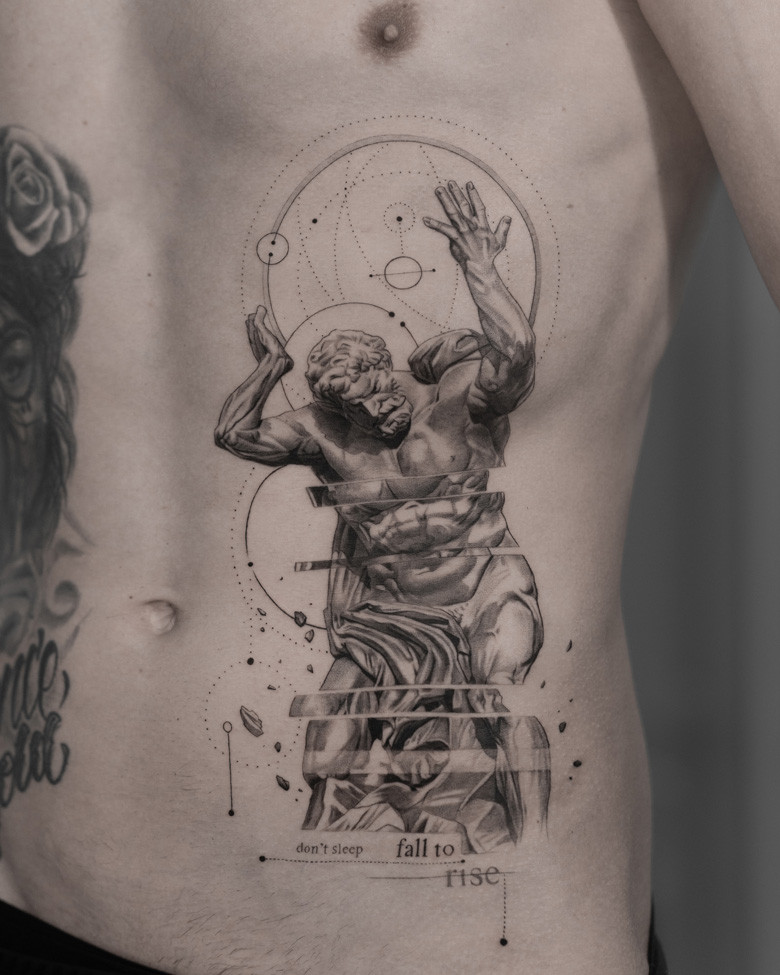 In addition to the plot component, the uniqueness of Evan Summers' work can be seen in their exemplary purity of execution. Even the smallest objects, each of which is an important part of the overall composition, are executed with amazing cleanliness and diligence. Such an approach to each tattoo cannot leave the artist without much attention from the audience. More than 45 thousand tattoo fans from all over the world follow Evan's portfolio.

In this interview, we tried to find out more about this gifted tattooer, his path to tattooing and creative plans.

- Let's get to know each other better. What is your name, where are you from? Evan Summers is your pseudonym?

- Hello! My real name is Ivan Pchelintsev. I am a tattoo artist, born and raised in Moscow. I have always been attracted to foreign culture and the English language, and my account was originally designed for a foreign audience. Therefore, I decided to choose a pseudonym that would sound better and more familiar to foreigners. Evan is one of the variants of my name in English, and Summers I don’t remember how it appeared. 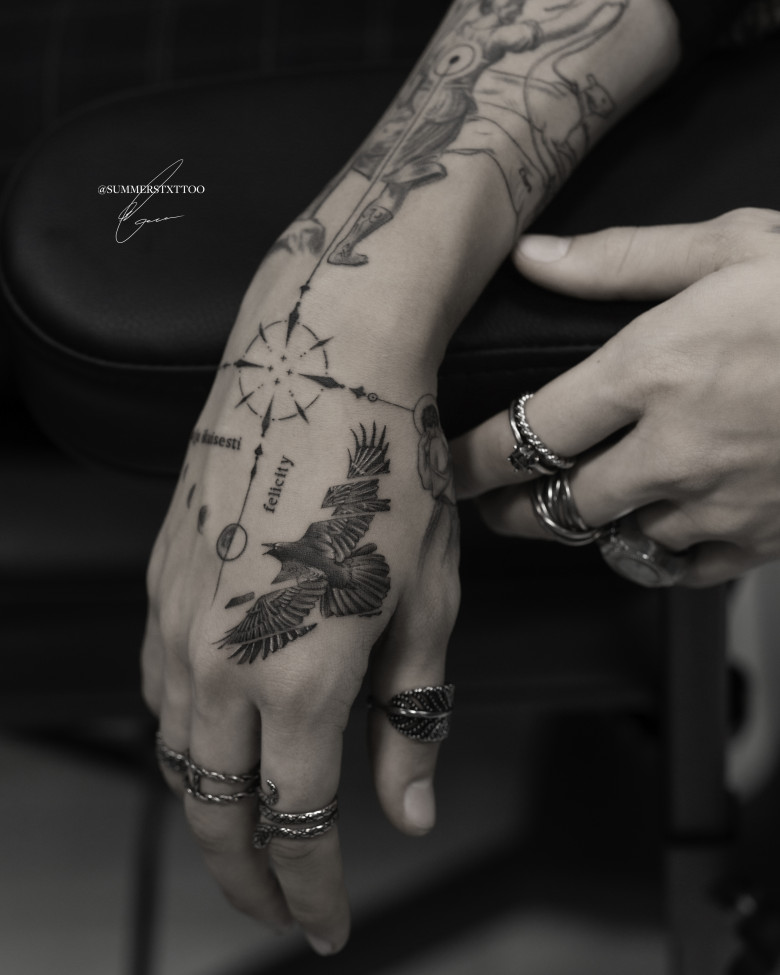 - Where and how did your tattoo career start?

- It all started quite spontaneously. I had a friend about 7 years ago. I was a student at this time. He then actively geting tattooed, and I drew something at an amateur level from time to time. And then one day he noticed this, and asked me to draw a couple of sketches for him, and then said that I should try to make tattoos myself. Then six months later, I passed the exams, bought equipment and started training. First on bananas and myself, then on friends and acquaintances. Then, after a couple of months, the first clients went. By that time, I was already trying with might and main to note what and how I do, and what it leads to, so that each new work is better than the previous one. That's how I moved and still move. For me, in all endeavors, it is always easier to learn on my own, otherwise I quickly lose interest. 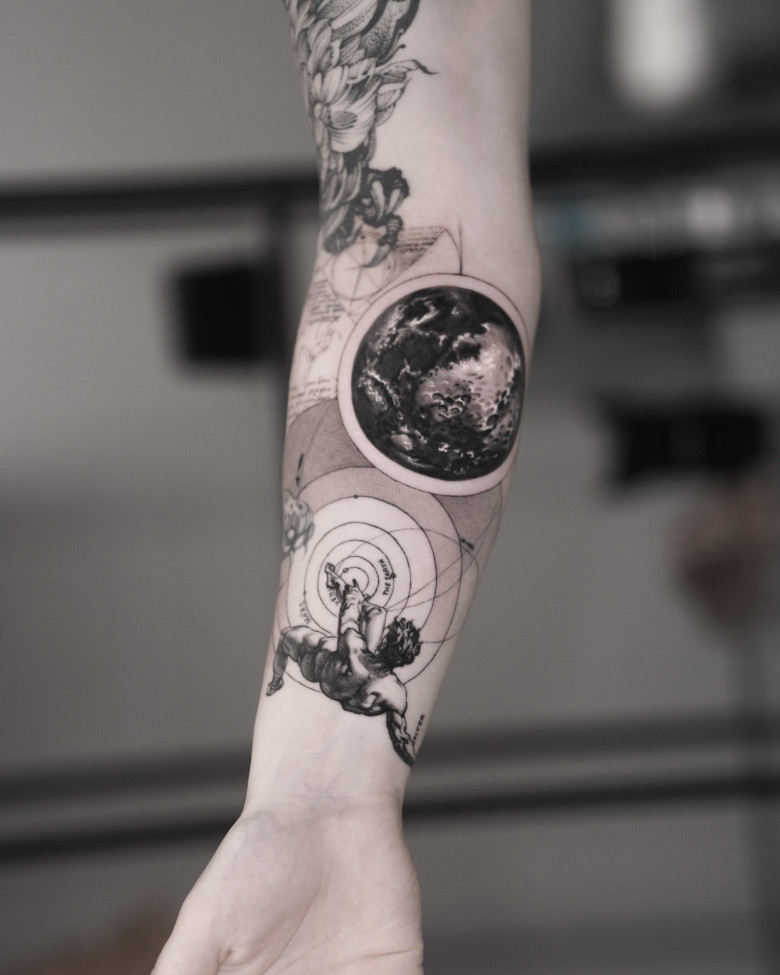 - Do you have any specialized art education? What possible job have you left for a career as a tattoo artist?

- I didn't get to go to art school. Right now I'm thinking of learning academic drawing, in some moments it would be much easier with it. After school, I entered the Economics University in Moscow at the Faculty of Marketing, from where I was expelled for a six-month absence after I started tattooing. 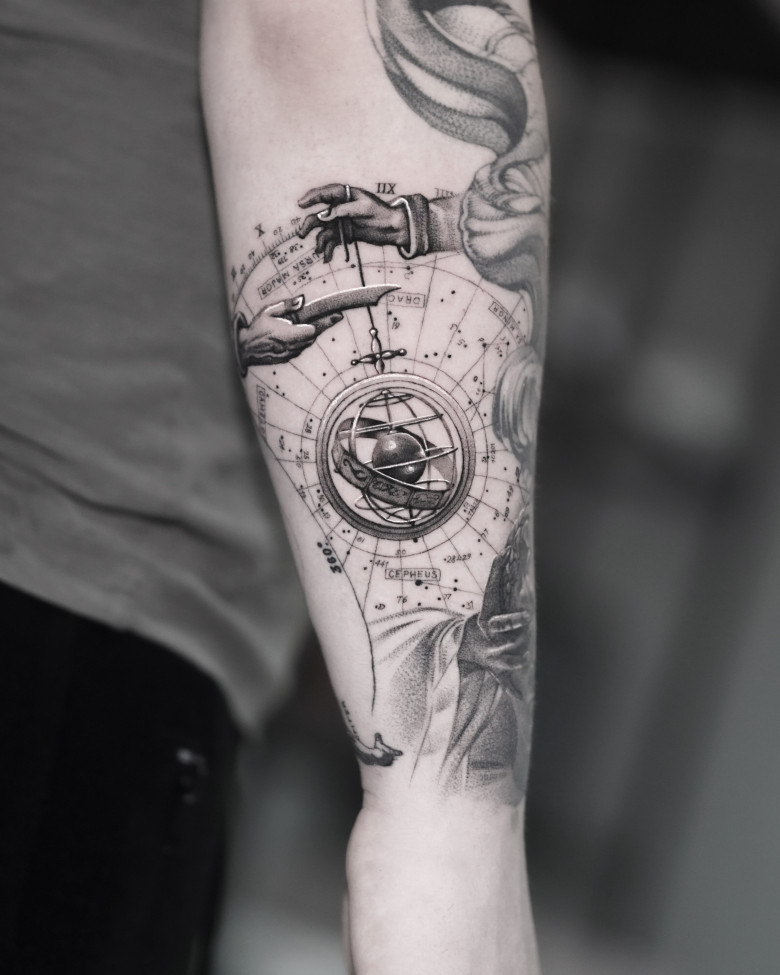 - What features of your portfolio can you highlight on your own? How did you come to the style you are working in now?

- I think I'm pretty good at small, micro-realistic objects. I've always liked small details and have been moving towards smaller sizes and higher levels of detail over the course of my career. I came to the conclusion that by adding various kinds of geometric elements, you can well accompany realistic objects, creating such a kind of visual background throughout the composition and additional meaning load. 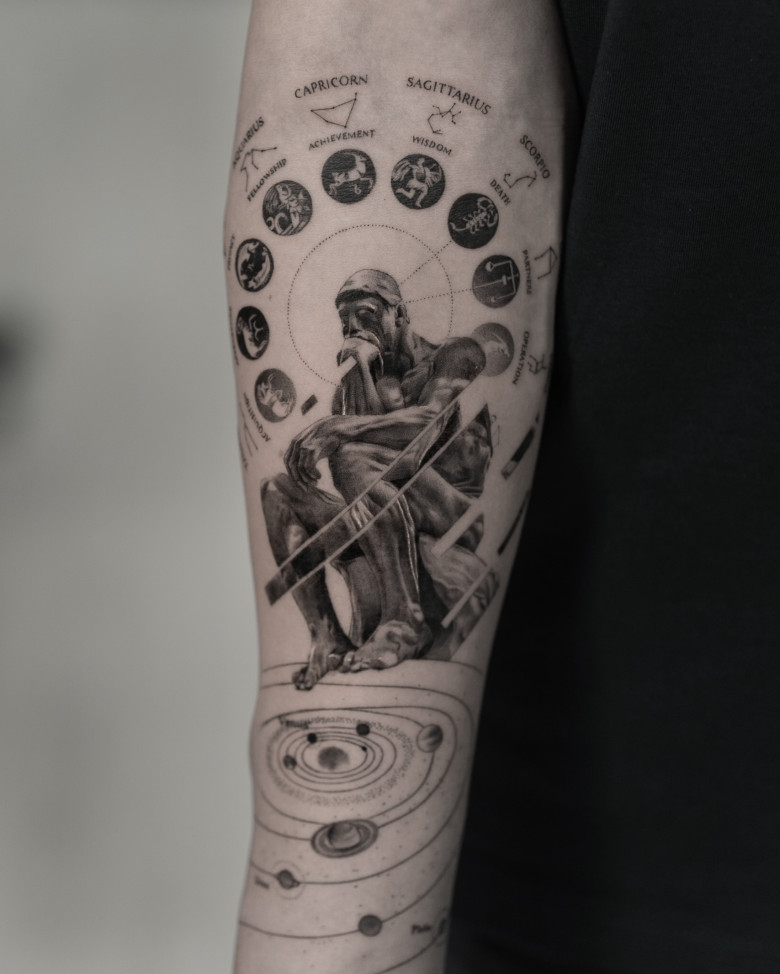 - Who or what inspires you?

- A lot of things inspire me, sometimes even things that you don’t expect inspiration from. Unfortunately, I have a hard time remembering these things. But what I do remember is loneliness. Not in a bad way, but exactly when you are left alone with yourself. Amazing things immediately start to come to mind. And the work itself is inspiring. When you sit down to work on a design or when you already get a tattoo, new ideas and solutions appear. 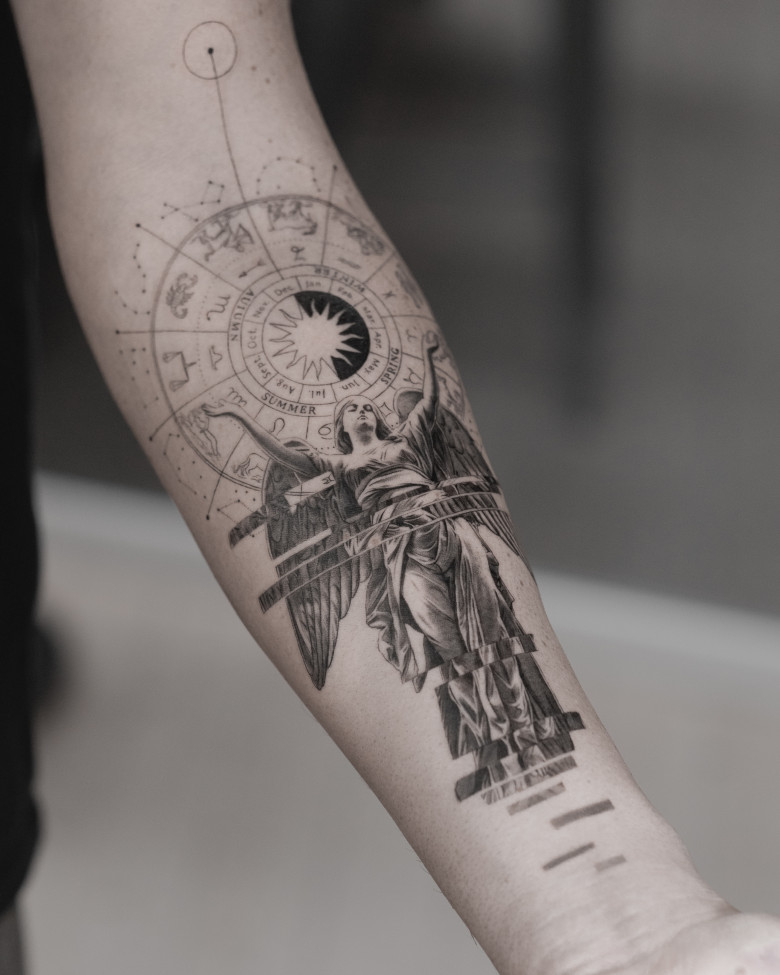 Astrological scenes in a tattoo by Evan Summers

- Where are you currently working?

- I work in Moscow. My wife and I opened a private studio for the two of us, arranged everything there as we like, and provided ourselves with maximum comfort at work. The ideal workspace is what produces the best results. 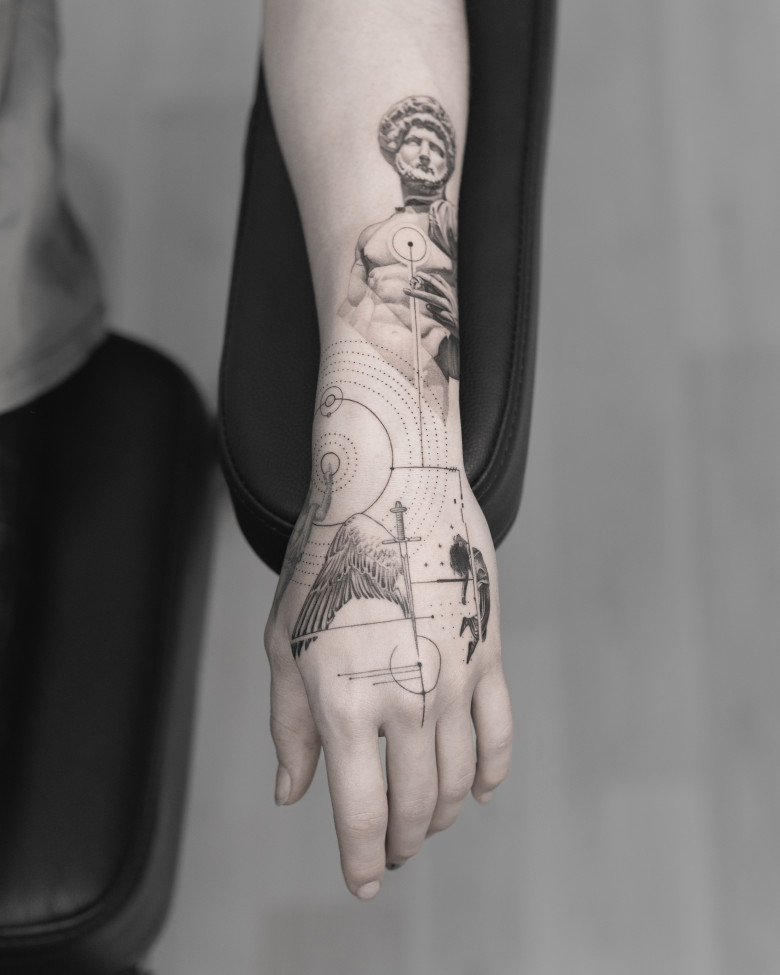 - Have you participated in tattoo conventions? Tell us about your experience.

- Once I worked at the Moscow tattoo convention, about 3 years ago. There was a two-day job, and, unfortunately, we did not manage to take any awards. But then I realized that the work at the convention is extremely difficult. Lots of distractions and a work time limit of 6-8 hours per day, which is pretty low for the level of detail I always work with. Something relatively impressive in size, I will have from 3 days of work, or at least two for 8-10 hours. 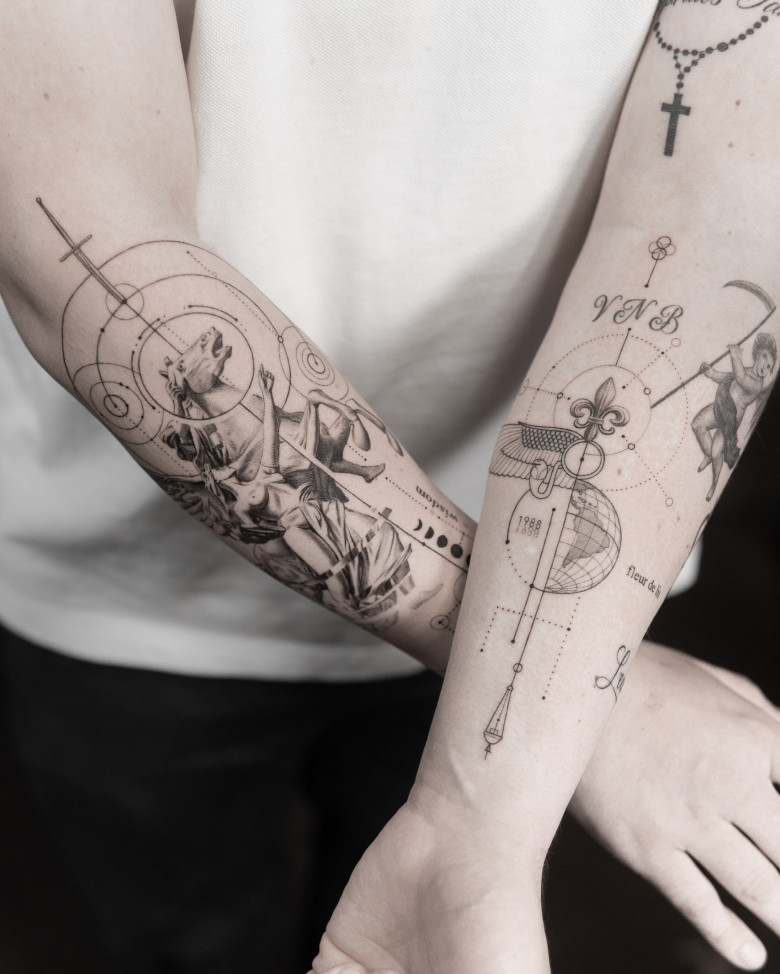 - While studying your Instagram, we noticed that in addition to the tattoo, you are passionate about analog photography. Tell me about this hobby.

- Photography has always fascinated me. When a phone with an adequate camera appeared in childhood, I immediately began to shoot something somewhere at a primitive level. Six months before I took up tattooing, I bought my first SLR camera and began to delve into the basics of working with it little by little. But it didn’t last long, because with the advent of the tattoo in my life, I didn’t have time for anything else at all. So photography faded into the background, but all the time went side by side with my main occupation. Still, I wanted to take better photos of my work. 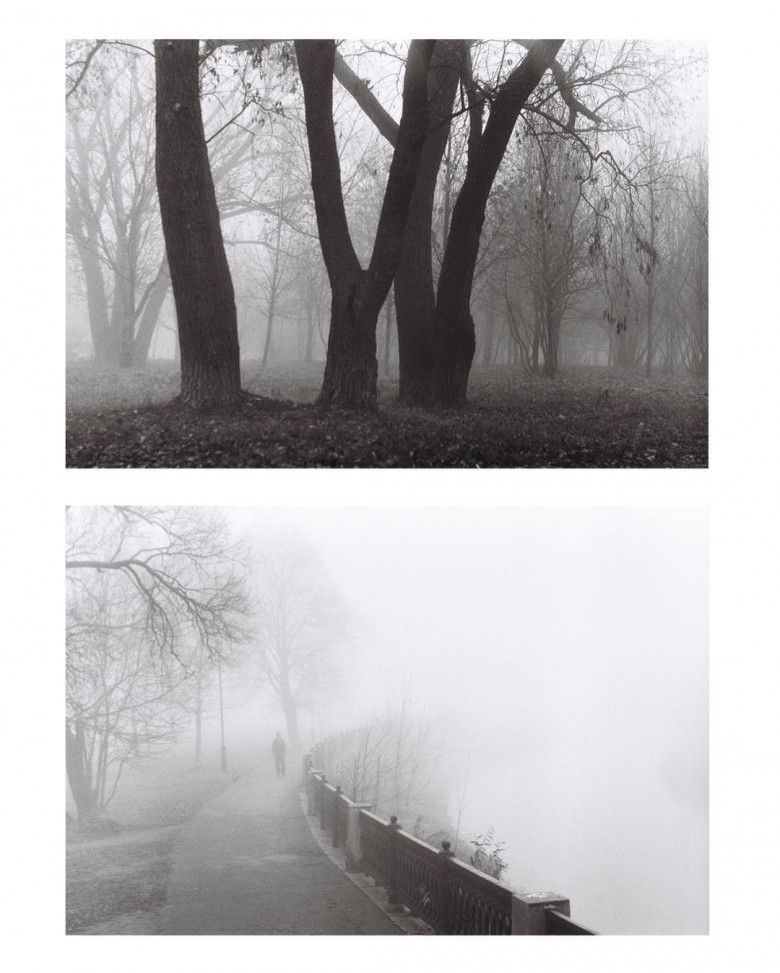 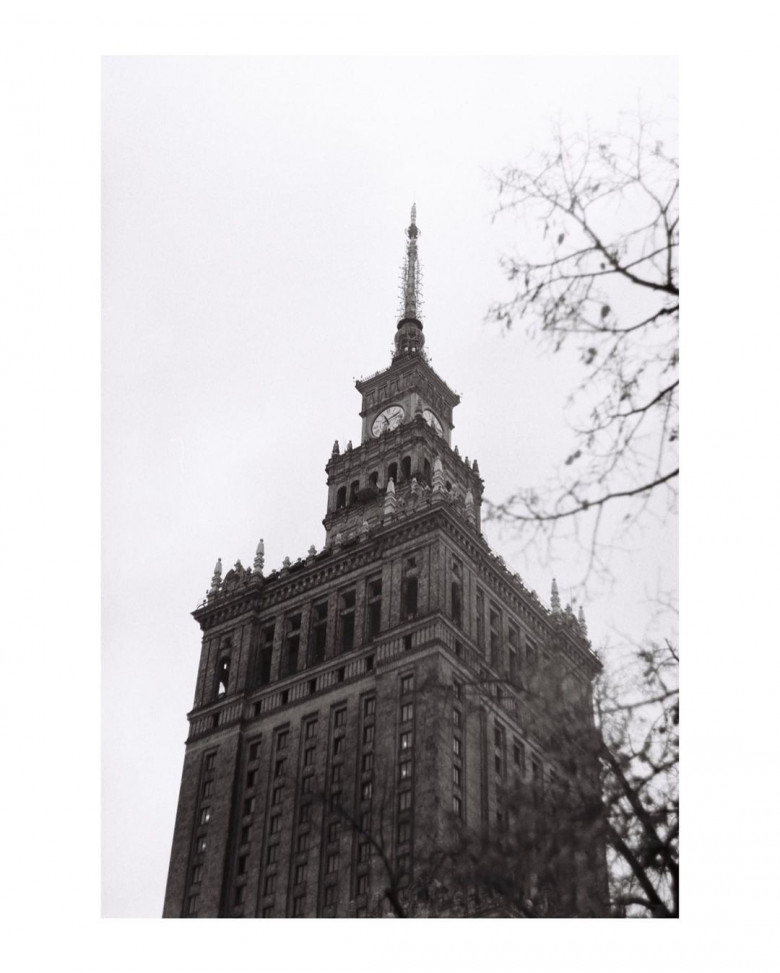 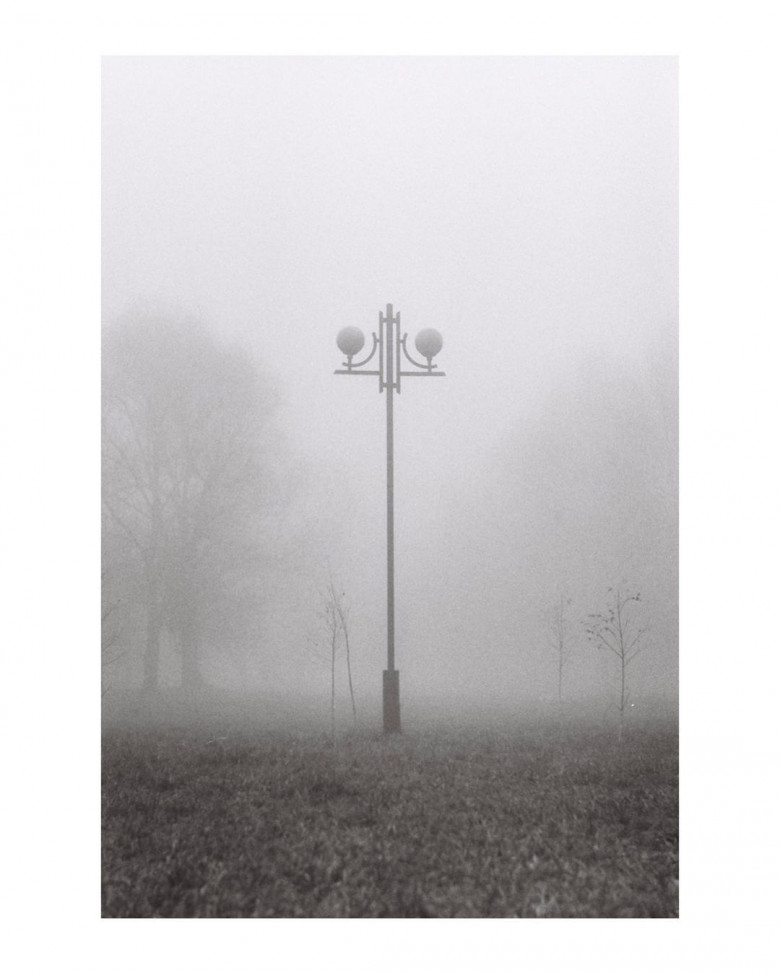 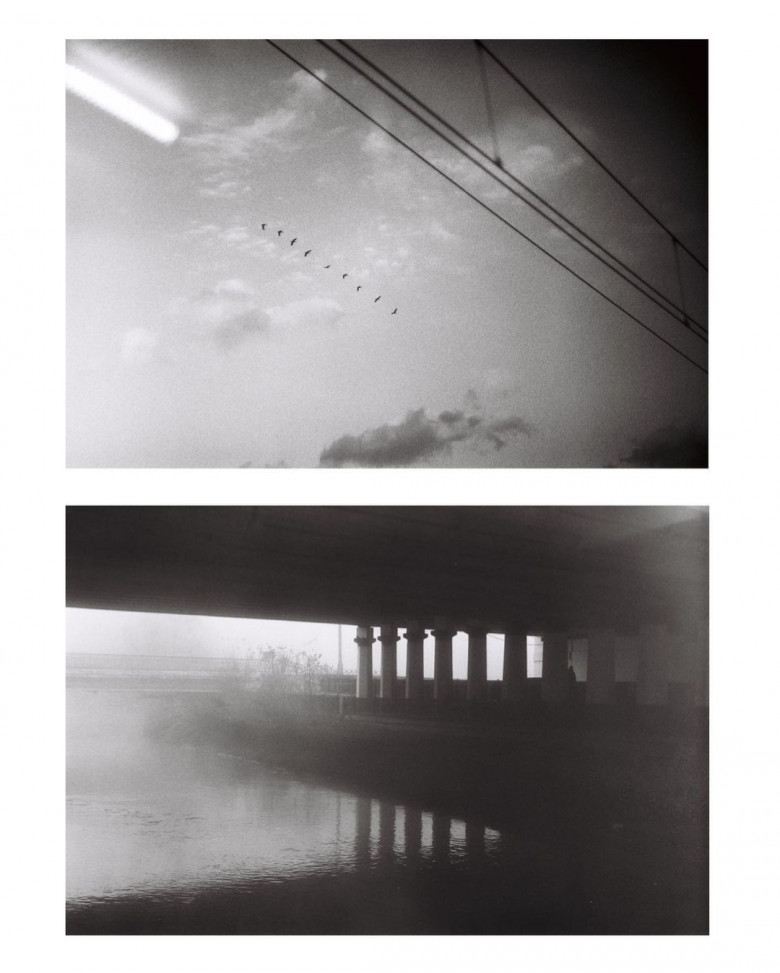 About six months ago, I was on a rather long vacation, trying to get distracted and take a break from the tattoo as much as possible. It was then that photography came to the fore from the periphery. And just then I stumbled upon film photography, and I became interested in trying it. Since about September, I have been slowly trying and getting used to the film, studying its possibilities of working with exposure, working on the basic principles of photography. So far I can only shoot a couple of films a month. The next step is to learn how to develop and scan it on my own. It seems to me that this will allow me to better understand film photography as such. 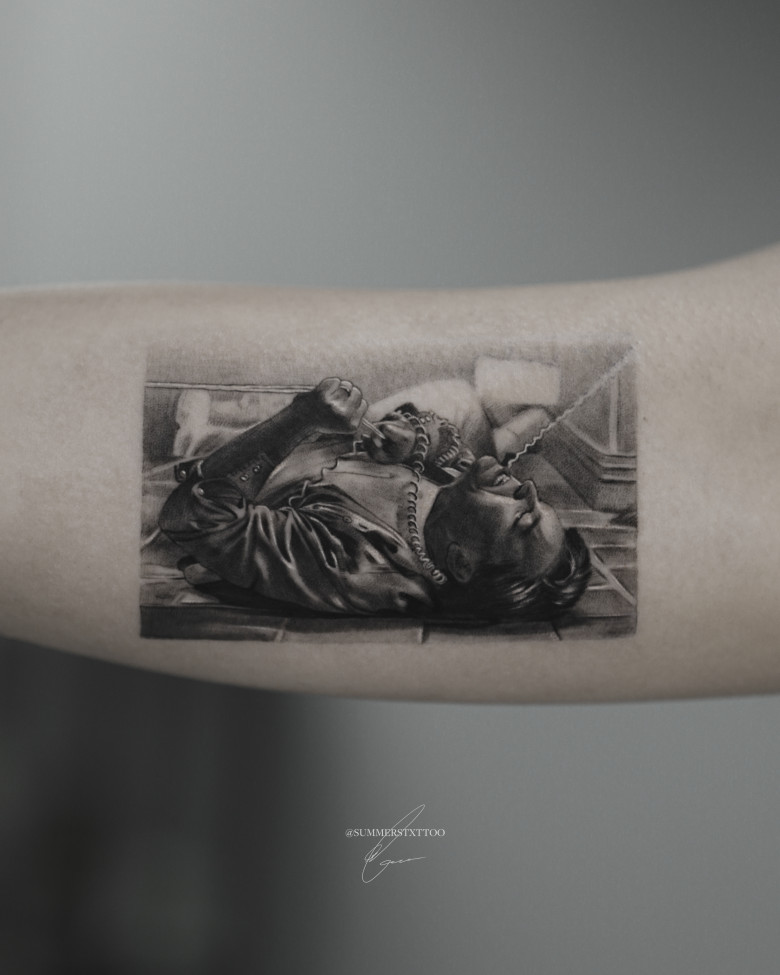 - How extensive is your tattoo geography? Where have you already worked and where would you like to work in the near future?

- In general, I started working abroad back in 2018. Shortly before the first working trip, my wife and I visited Thailand and, returning to the cold winter Moscow, decided to go back to the hot sunny jungle at all costs. But there was already a question about work. So we went to Indonesia, namely the island of Bali, where Australians and Europeans constantly come, which means that you won’t sit idle. There were mostly non-core works, but nevertheless this trip gave me great experience in communicating with foreign clients in English and in optimizing working time. 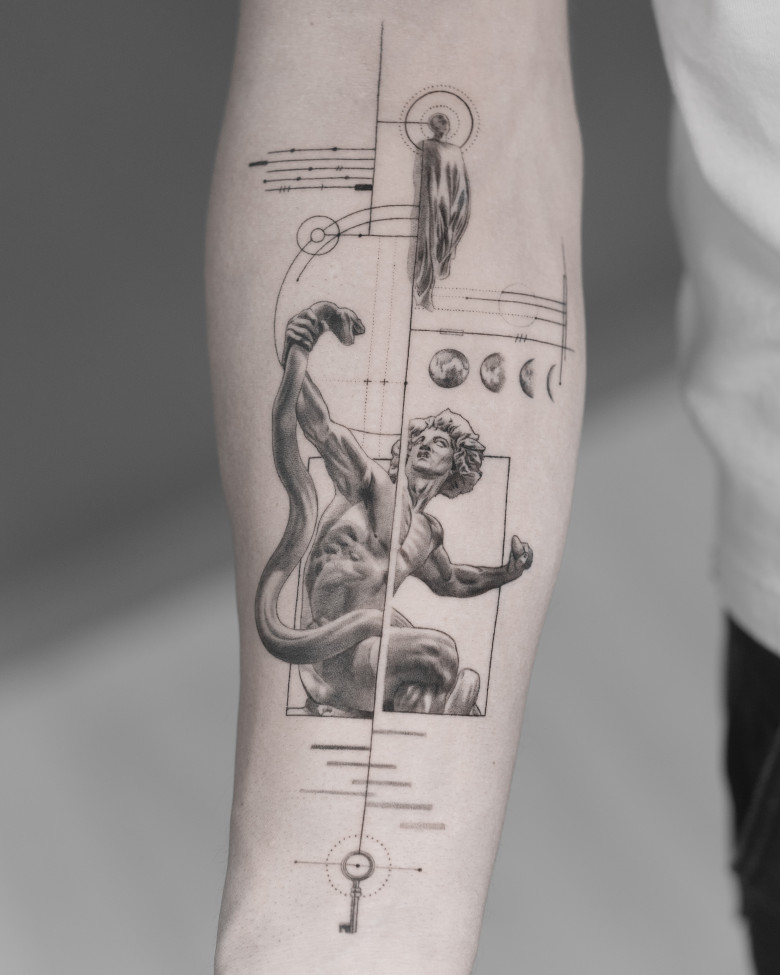 Symmetry and attention to detail in a tattoo by Evan Summers

Upon returning from Bali, trips to Europe began. For several years I had the opportunity to work in Germany, Holland and Sweden. I'm not one of those guys who tours several cities and countries for several days in each. I have always strived to optimize my trips as much as possible. So I came to the conclusion that I have been coming 2-3 times a year for the last couple of years only to Sweden, to the same studio of Niki Norberg in Gothenburg. It is always as comfortable as possible to work there, there is a lot of free space around and few people, which is an absolute plus for me, since I like a very calm and measured environment so that nothing around distracts me.

In the near future I would like to go to London and Tel Aviv. From both places I received personal invitations from eminent artists who work in a style similar to mine. And the residents of these places themselves sometimes ask me on Instagram if I plan to come. 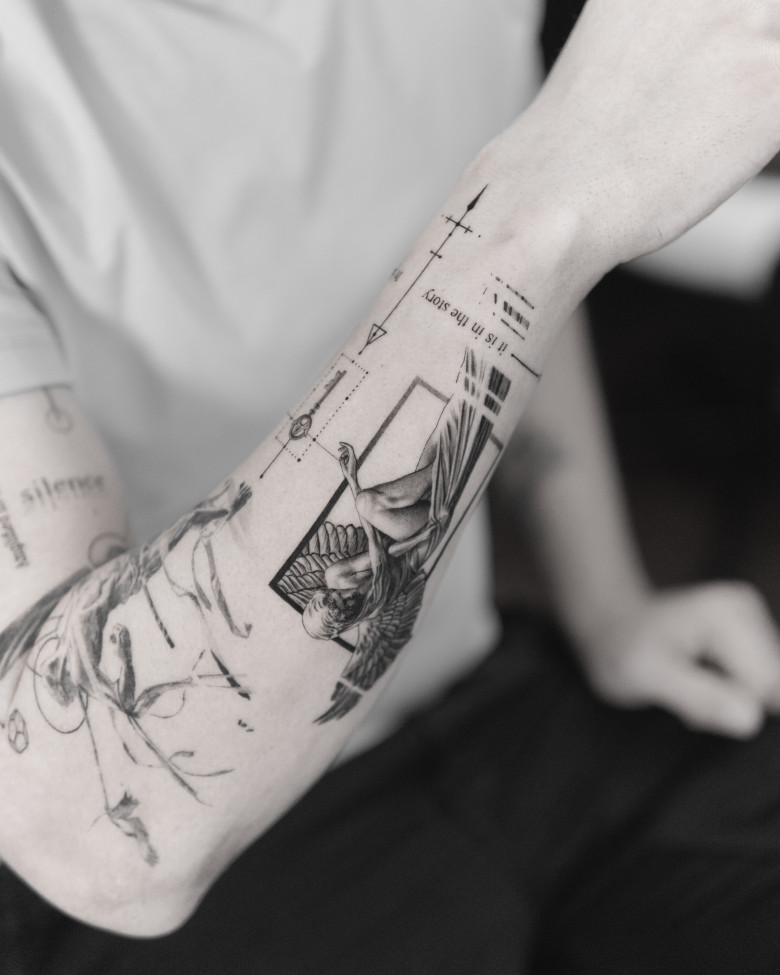 Lots of detail in tattoos by Evan Summers

- Are there many foreigners among your fans?

- In general, yes, a lot. As I said earlier, my account was originally designed for a foreign audience. If you look at the statistics of my Instagram, you can see that I have only 7% of subscribers from Russia.

- Are you planning any personal events?

- Actually, I plan to attend several overseas conventions in the near future. Also in the plans is a collaboration with the jewelry brand of my friend. I really want to do something unusual and experiment with shapes and materials. 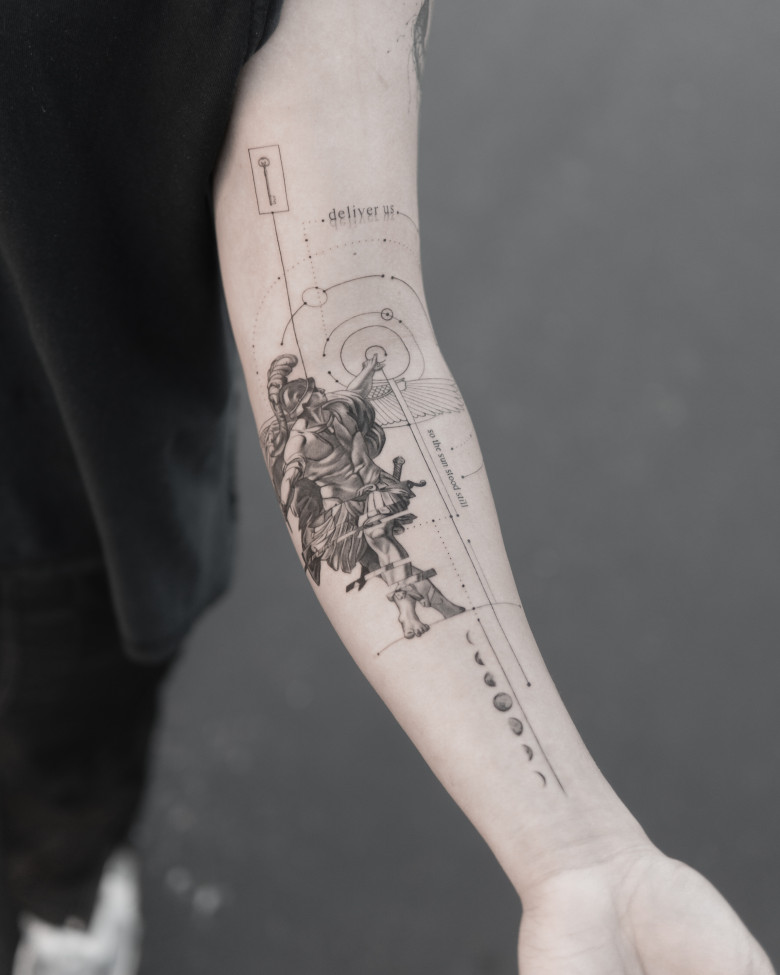 - Share your secrets on how to find inspiration and strength for work and creativity when there is none?

- This is a very difficult question, in fact, which sometimes torments me.

Before the tattoo, I was into music and often composed. There are moments when you sit down, and the notes pour by themselves one after another, and after a couple of hours something serious is outlined in you. And it happened the other way around - for several hours you fight like a fish on ice, and you will try this way, and that, and in a different way. And it doesn't come out. Then, of course, you need to stop and try another time. 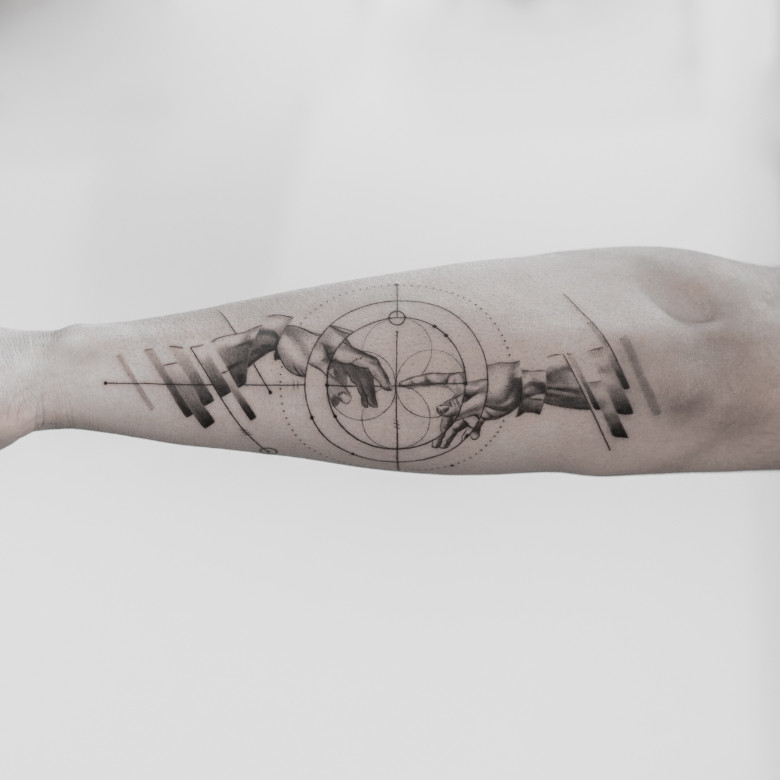 But if there is no strength and inspiration for some time, and you can’t get up in any way, then there may be burnout to one degree or another. There is nothing terrible about it, it happens, it seems to me, with almost everyone and in almost all areas. If possible, you need to move away from your business as much as possible, at least for two weeks, and do something else, try to learn something or develop an existing hobby.

And so, of course, it is necessary to look at the situation. It took me the last two and a half months to come to my senses and love my job again, because before the holidays I was already literally shaking from any activity related to the tattoo, whether it was tattooing, designing, communicating with clients or editing photos for social networks. . It was during that vacation that I had the idea to try my hand at analog photography. Now it helps me to switch the focus of attention from time to time and not to stagnate in one direction.