The modern tattoo artist is not just an artist who knows how to hold a tattoo machine in his hands. He is a man of art with many talents.

This is exactly what the hero of our today's article is. Alexey Buzunov - a famous Russian tattoo artist, musician and lead singer of the KAPKAN group, will tell you about his creative path today!

- How did you come to the tattoo? What made you become a tattoo artist?

- It all started when I was studying to be a woodcarver. I didn't plan to become a tattoo artist, but wanted to be an artist, paint pictures or do woodcarving. At some point I came to the point that I started to draw sketches for tattoos.

It was a time when some guys independently assembled tattoo machines for themselves, so I also decided to assemble my first machine and began to test my abilities on my friends.

I was reinventing the wheel because I had no familar tattooists to tell me anything. I worked at home for a very long time, after in a tattoo studio, which was opened by my friend. It was the moment from that my professional career began. 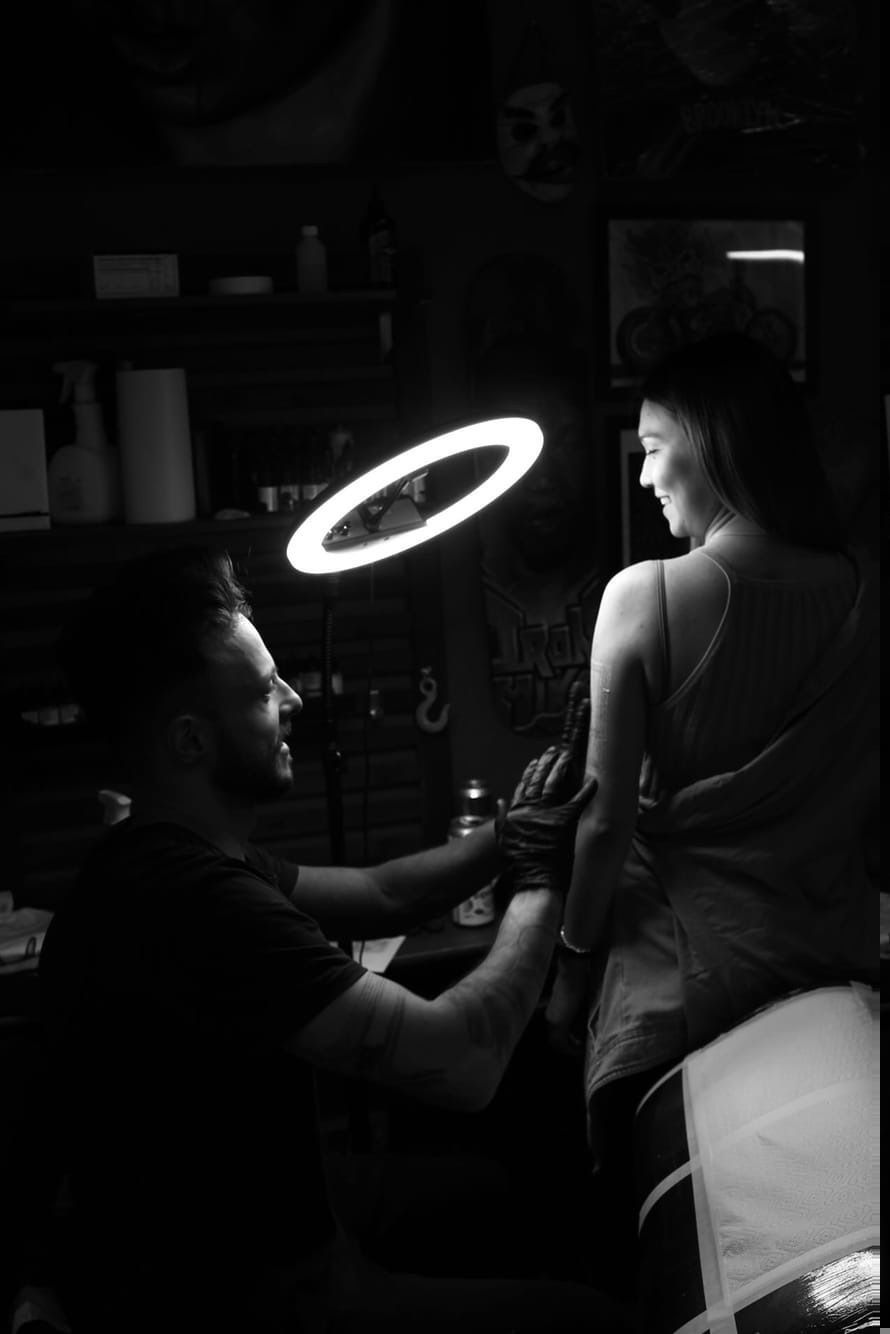 - How did you come to the style you are working in now?

- As a craftsman, I do many different tattoos, in different styles, and at a certain time, this was very embarrassing for me, because I wanted to draw something of my own, realize myself as an artist, find my own style. Such an eternal search for style annoyed me, because I like a lot of things - usually I start with one thing and end with something else. 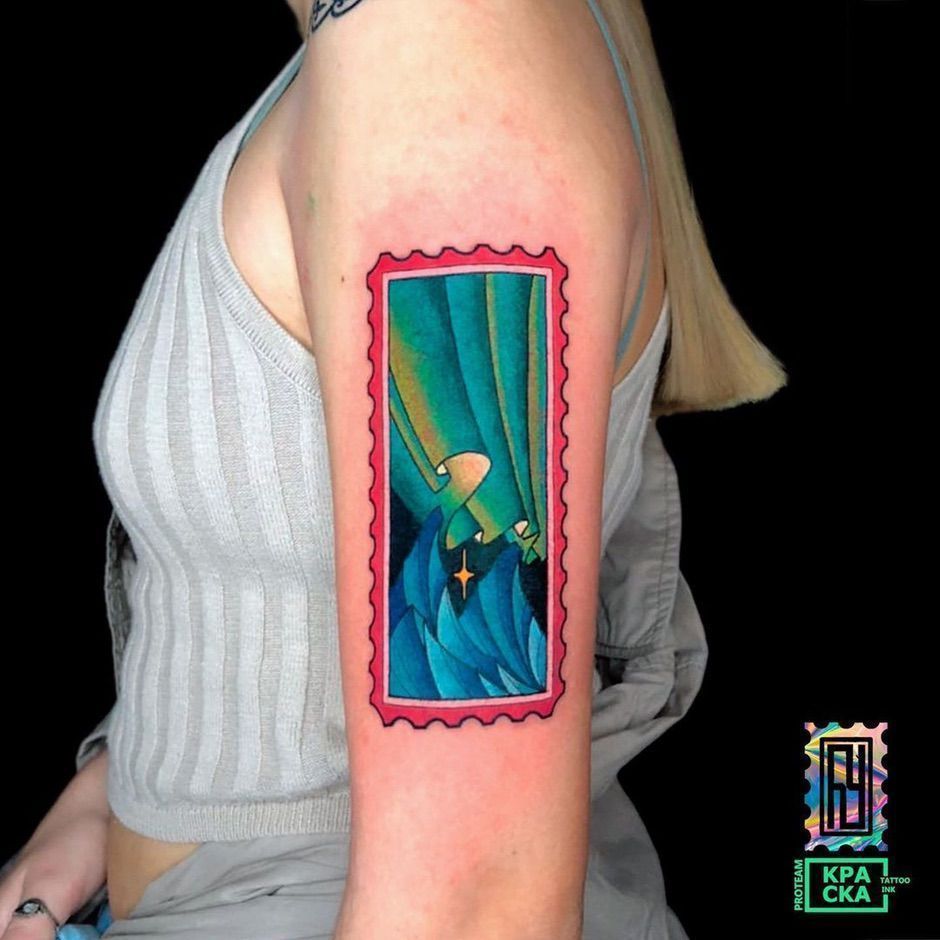 But during the lockdown, in March, I, so to speak, tried to «reset to zero» - I began to draw various primitive drawings that just came into my head. At that time I had only one felt-tip pen at home, and I started with simple pictures, but my heart demanded to complicate my work - in terms of shadows and contours. The main thing that I liked was that I came to the topic of postage stamps - that is, in the form of a postage stamp, I try to fit some images from my head. But, yes, I really liked the shape of the postage stamps in the tattoo, I want to continue to hit in this style. 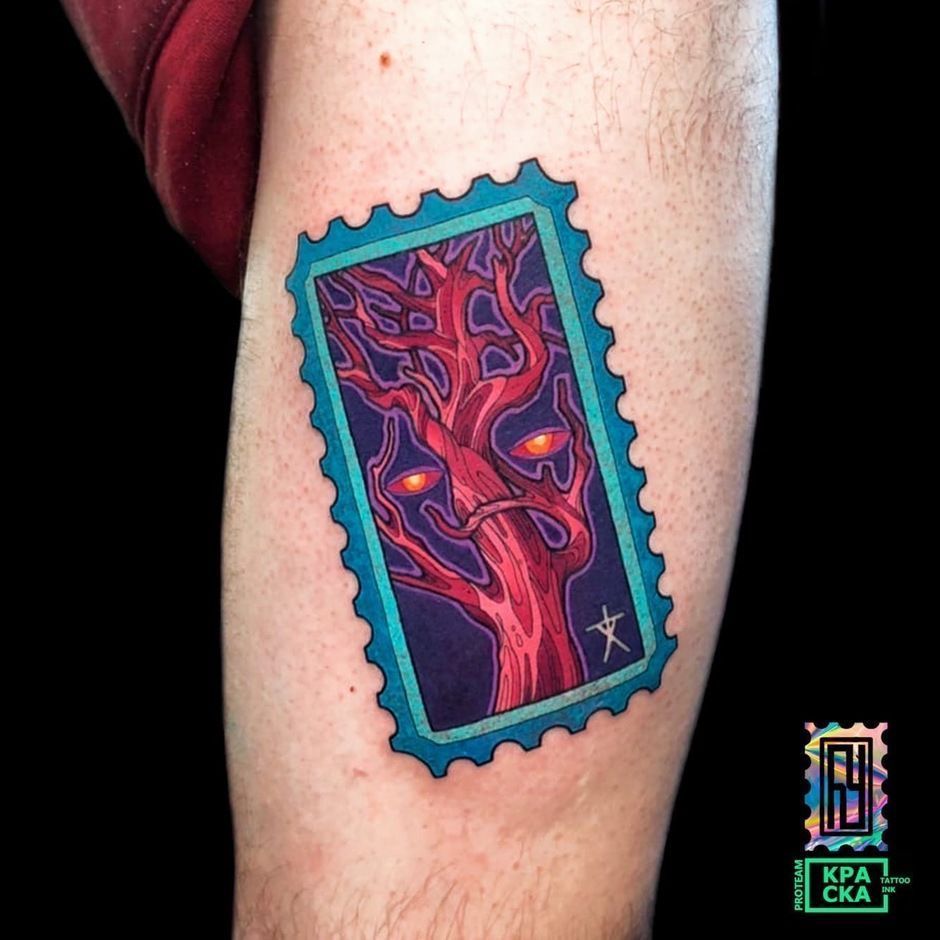 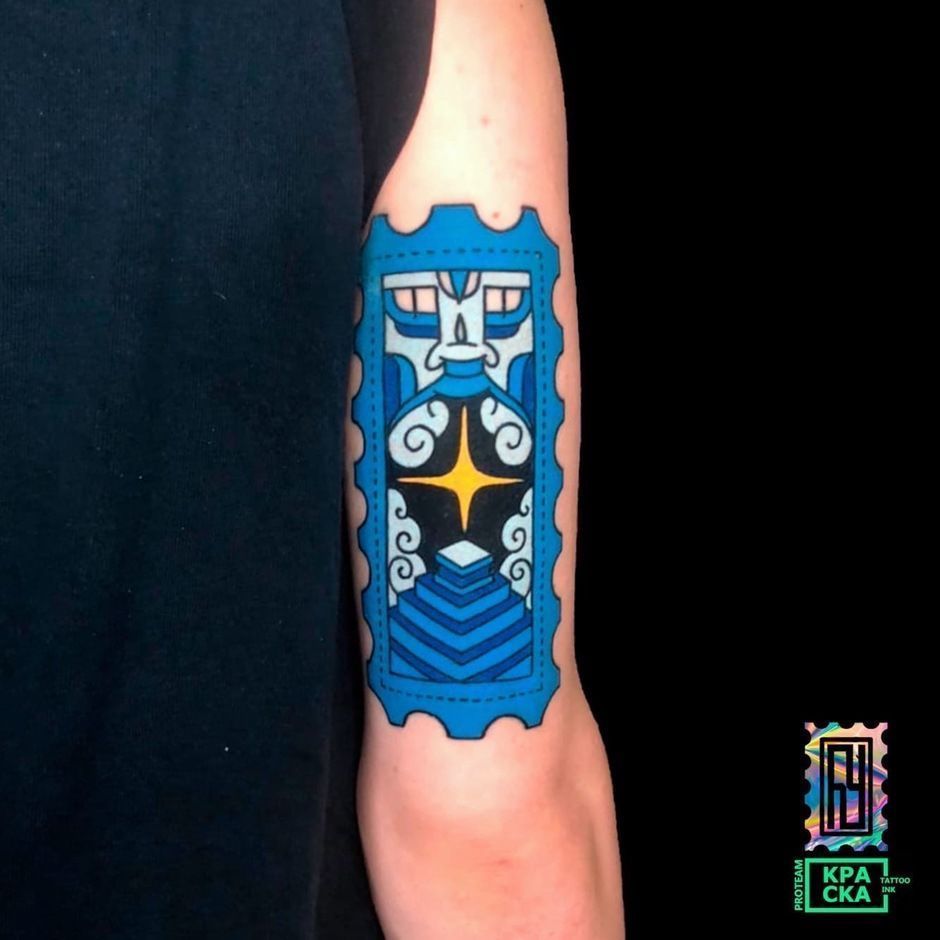 - How do you feel about tattoo culture in general? Do you have your own wishes for this area?

- I have a great attitude to tattoo culture, I like to watch how it develops. Until recently, people were afraid to do something bold in a tattoo. I remember a time when people were afraid of a lot of black in a tattoo, or vice versa, when a tattoo is too colored. The trick, of course, is that I live in Moscow, I think this process is different in other cities in Russia. Recently, a comrade-tattooists from Tomsk came to us, and he said that in Tomsk, for example, people do not like old school, although in Moscow they adore him. But in general, people develop, people grow, and not to be afraid of the new - these are the most important things. 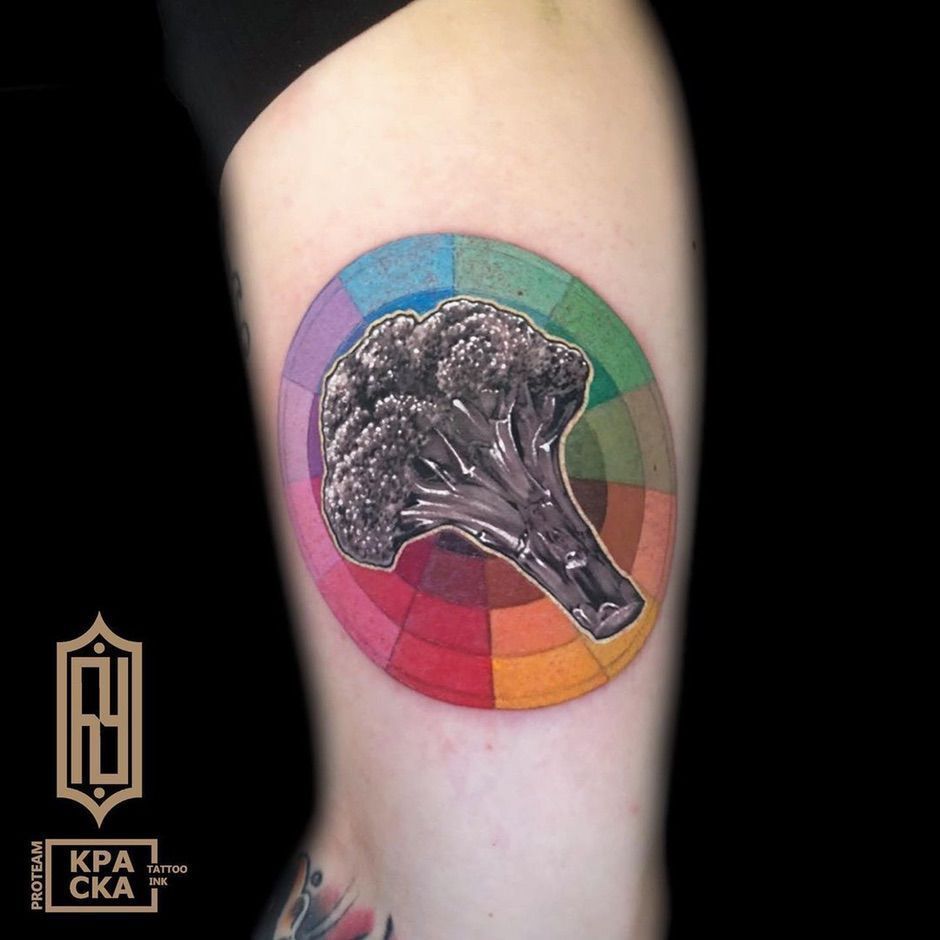 - What brand of tattoo ink do you currently use in your work?

- By myself, I am the kind of person who loves everything of ours - I love music in Russian, I love clothes from Russian brands. I don't really like this attitude of people - that if something is Russian, then it is of dubious quality. I think it's strange not to trust your own people, your friends, comrades. It is strange to trust and be guided only by something Western and European, although we are also cool in many areas. 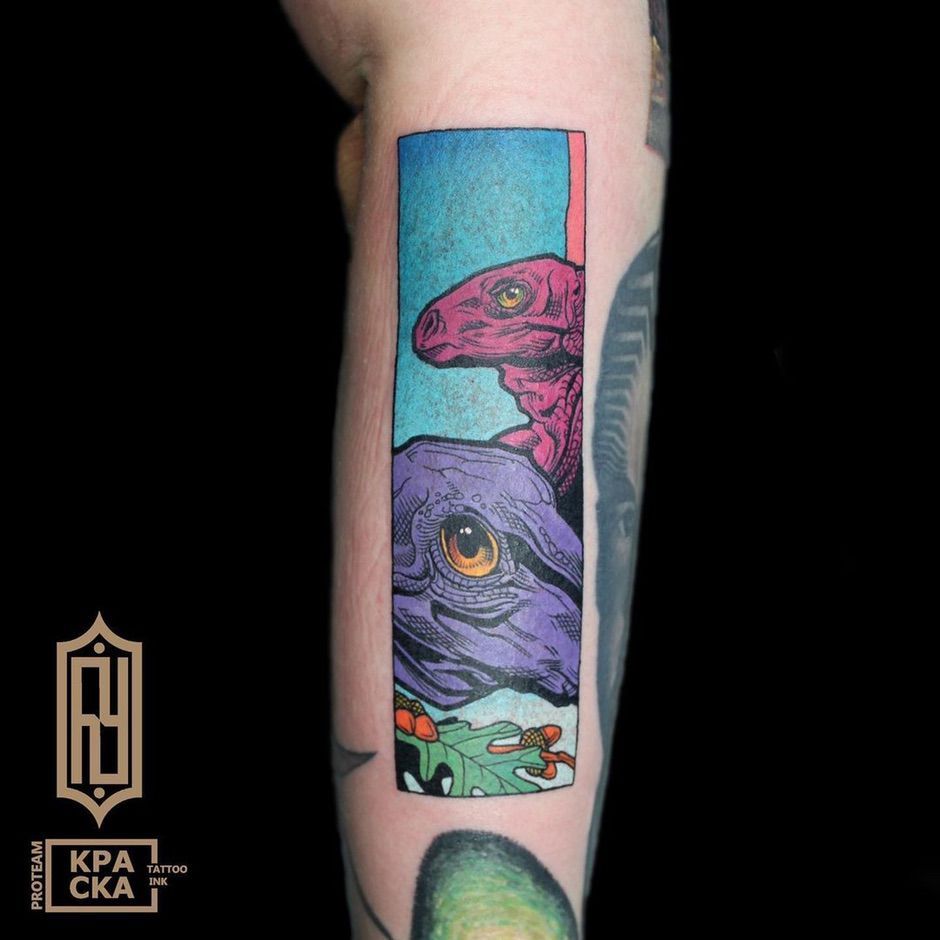 I had a period when I was thinking about sponsorship, looking for brands and tattoo ink companies. And I was very surprised when I learned that in Russia we have our own brand «КРАСКА», which is just starting its activity. So I tried working with their pigment, and a little later I got sponsorship. Over time, I delved deeper into this brand - I liked to watch how the palette grows, how some cool colors are added, how they fit cool, I like the consistency. I have favorite pigments, without which I simply cannot do certain works successfully.

- What prospects do you see in tattoo culture?

- The tattoo culture in Russia is such a separate organism that knows its own path, which itself transforms over time. The most important thing I would not want is for this culture to go into the shadows. Every day I am convinced that this sphere occupies a certain place in our people. Now completely different classes of people or different professions got tattoos. Previously, people working in a bank could not afford to get a tattoo, but now - no problem. 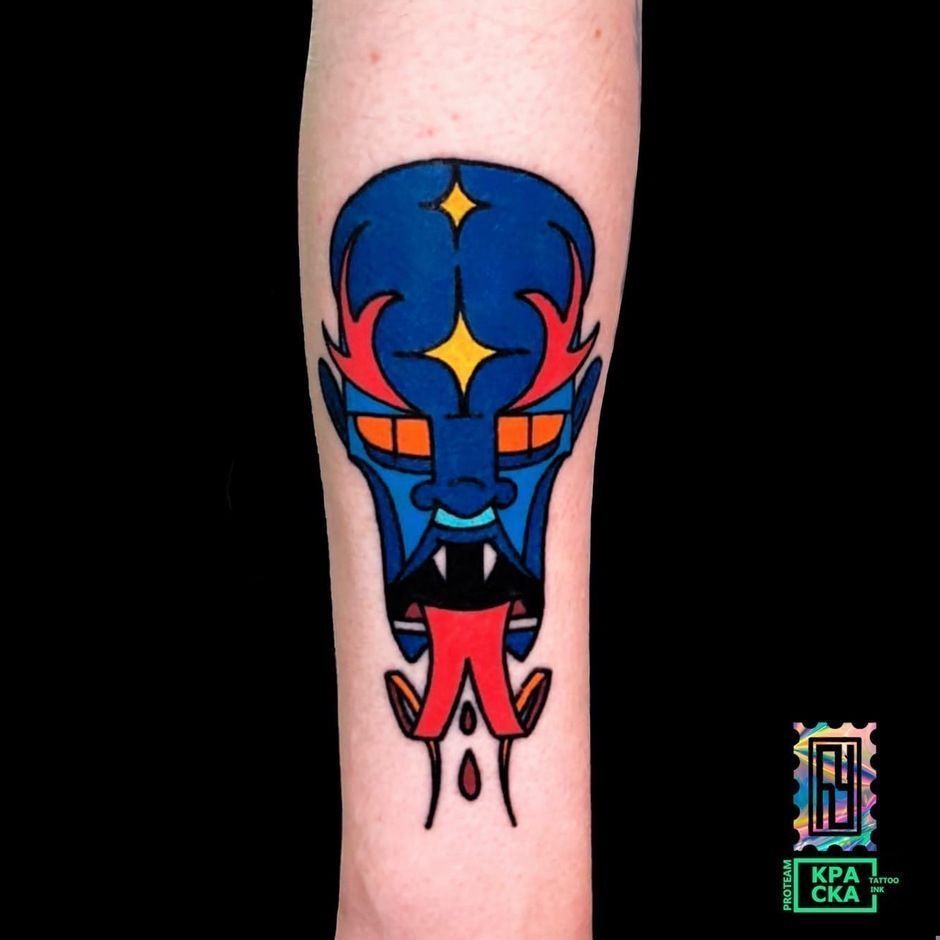 For example, I now have a client - an anesthesiologist who tattooed himself very powerfully. The tattoo has grown into culture, the tattoo is transforming, so I think it will only get more interesting.

- Do you have any personal plans for a tattoo career?

- I see myself just as an artist, for me this is the most important thing. I would like to be 70% an artist, 30% a craftsman.

Well, according to the classics, a message to all creative people - love art in yourself, but not yourself in art. 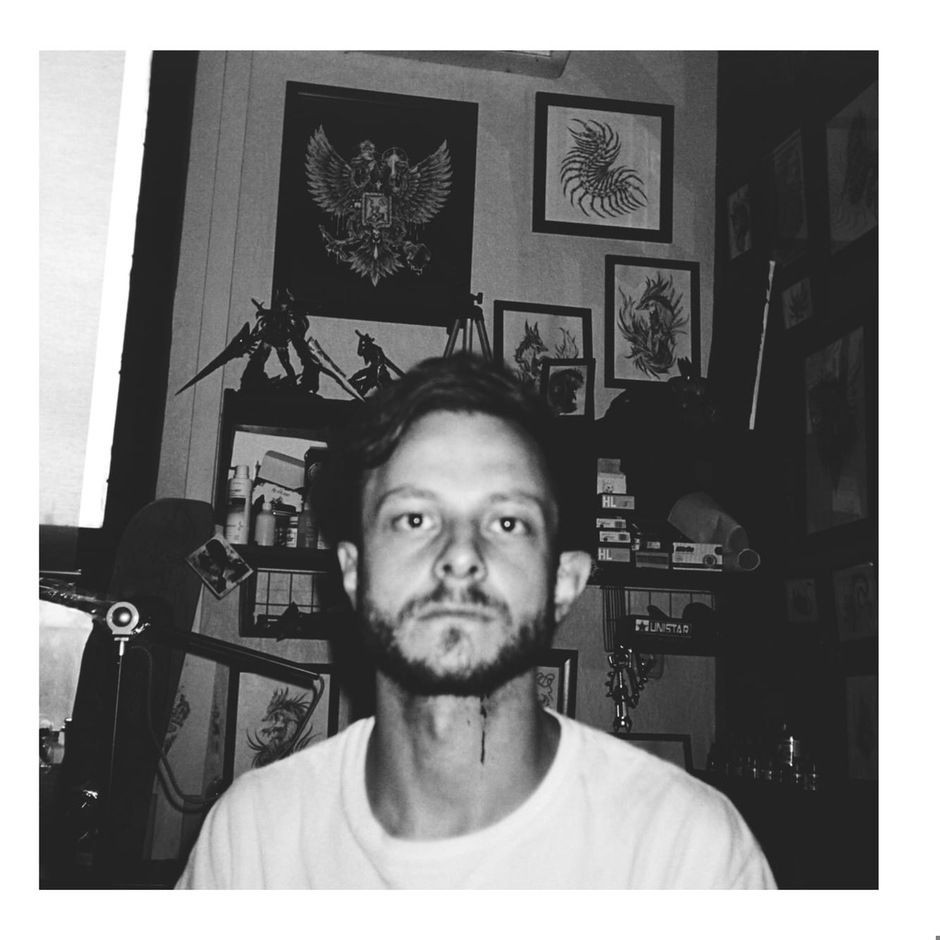